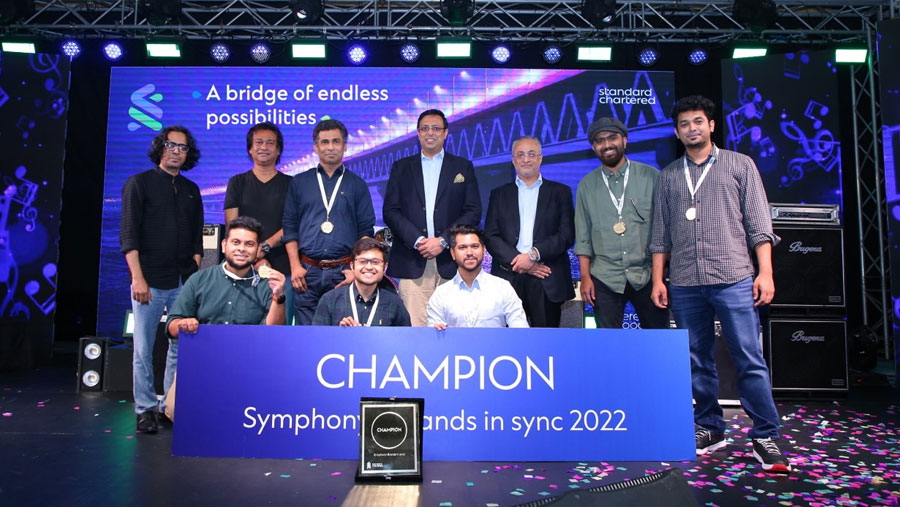 Standard Chartered Bangladesh held the Grand Finale event for ‘Symphony – Brands in Sync’ in Dhaka on Jun 25, 2022. Launched in November of 2021, the musical competition is the first-of-its-kind in Bangladesh.

The following awards were also given to this year’s standout performers:

Naser Ezaz Bijoy, Chief Executive Officer, Standard Chartered Bangladesh, said, “We are delighted to celebrate these talented musicians and their inspiring performances on such an auspicious day – a day that celebrates our nation’s 50-year journey of growth and prosperity. I would like to extend my heartfelt congratulations to the Government of the People’s Republic of Bangladesh for the inauguration of the Padma Multipurpose Bridge which to the millions of Bangladeshis, is more than a bridge, but rather a bold statement of Bangladesh’s ability to turn dreams to reality. I would like to dedicate this first iteration of our signature platform, Symphony – Brands in Sync, to this historic achievement.”

He added, “I hope that this competition is only the beginning of each band’s musical journey. I would like to thank our corporate clients for making this competition possible and for nurturing the creative talents of their colleagues. I would also like to extend my gratitude to Bappa Mazumder,

Naquib Khan, Partha Barua, and Shafin Ahmed for their support and mentorship, and to Warfaze and our former colleague Sunjoy for their excellent performance.”

This year’s event marks the conclusion of the first iteration of ‘Symphony – Brands in Sync.’ Following the launch of ‘Symphony – Brands in Sync’ in late 2021, Standard Chartered’s corporate clients were invited to register their in-house bands via their Relationship Managers. During the preliminary stage of the competition, interested bands submitted pre-recorded audio tracks. The five finalists for this year’s Grand Finale event were selected based on an assessment of the submitted tracks by the panel of judges. Once selected, finalists benefitted from two months of practice in addition to one-on-one mentoring from the trio of celebrity judges.