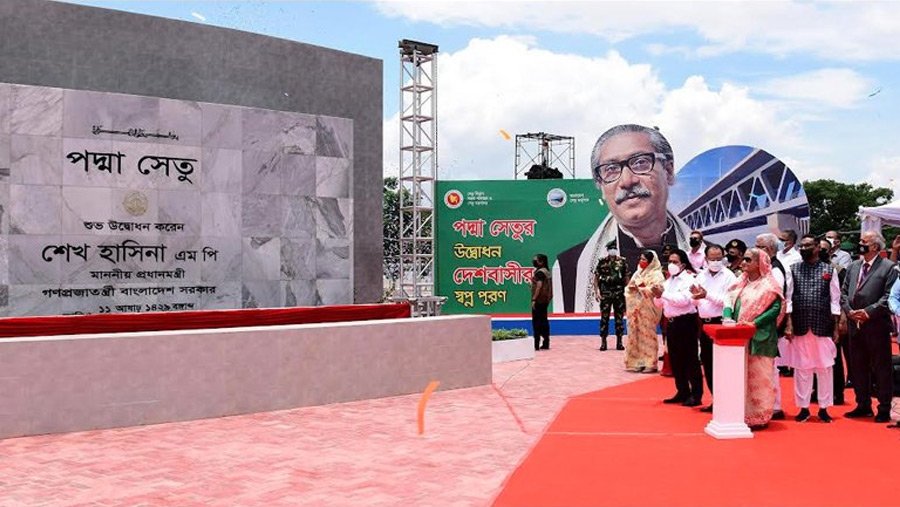 Sheikh Hasina inaugurated the bridge on one of world's mightiest rivers connecting southwestern Bangladesh with the capital and other parts while both the streams are considered powerful in terms of their length, water discharge and morphological trends.

The premier unveiled the plaque of the Padma Bridge in the morning at Mawa end at a colorful ceremony where thousands of distinguish guests including foreign diplomats were present, local media reported.

The event came 25 years after she opened the Bangabandhu Bridge on the Jamuna River, another most powerful stream, linking northwest with Dhaka and other parts of the country in 1998, until when that was Bangladesh's longest multipurpose bridge.

But the Padma Bridge carries extra significance as the structure was built entirely with domestic financing, defying speculations by many financial analysts if Bangladesh could mobilize the fund depending on domestic resources.

The Padma Bridge project witnessed several engineering wonders as well as technological challenges but eventually emerged as a wonder structure for Bangladesh that saw use of state-art machineries and know how.

On political considerations, the project also was faced with multi-pronged obstacles amid subtle campaigns to force the government to virtually abandon the initiative halting overseas funding for its construction.

Several political and diplomatic analysts even some overseas partners had also speculations that the project would eventually be a failure.

But, at last, the mighty Padma River becomes conquered and people living on both the banks are no more helpless as they have now got the connectivity with both sides.

From Sunday, the people of southwestern region will drive straight to Dhaka by road, leaving the awful nightmare of ferry ghat, as they will now cross the river in just six minutes over the bridge.

The dream bridge which will not only establish the long-awaited direct road and rail communications between Capital city Dhaka and south-western parts of the country, but also opened up the doors of greater connectivity and trade among the Asian countries.

Besides, the bridge will also have significant economic impacts by cutting the travel time as well as other costs to bring prosperity for 21 districts in particular alongside the national in general.

Cabinet Secretary Khandker Anwarul Islam delivered the welcome address at the function with Road Transport and Bridges Minister Obaidul Quader in the chair.

At the outset of the function, the theme song was also played while a documentary on Padma Multipurpose Bridge was screened.

Earlier, the PM arrived in Mawa by helicopter and attended a gathering of dignitaries marking the grand opening of the Padma Bridge.

To mark the historic moment, she also unveiled commemorative postage stamps, souvenir sheets, opening day cover, note of Taka 100 and seals as part of the grand opening of the country's biggest self-financed mega project which is likely to boost GDP by 1.2 to 2 percent.

Before the opening of the Padma Bridge, she also took photos with the concerned officials involved in construction of the bridge.

Unveiling the plaque, Prime Minister Sheikh Hasina has initiated the process of giving toll to cross the much-awaited Padma Multipurpose Bridge, soon after opening it to the traffic.

The premier became the first person to cross the Padma Bridge by paying toll and went to the Jajira end to join a public rally.

The Padma Bridge became visible with the installation of the first span on 37th and 38th number pillars on Sep 30, 2017. Later, all 41 spans were installed on 42 pillars one after another. The entire structure of the multi-purpose 6.15 kilometer Padma Bridge became visible with installation of its last 41st span on Dec 10, 2020.

The self-financed bridge project was implemented at the total cost of Taka around 30,193 crore.

The first span of the Padma Bridge was installed at the Jajira point of Shariatpur on Oct 7, 2017.

The construction works began in December, 2015 as the premier inaugurated the river training work and main construction works of Padma Multipurpose Bridge project at Jajira point in Shariatpur district on Dec 12 in 2015. But, the PM formally laid the foundation stone of the Padma Bridge at Mawa in Munshiganj on Jul 4 in 2001.

After the Bangladesh Awami League formed government in 1996, she visited Japan in 1997. She proposed building of bridges over the rivers Padma and Rupsha. The Japanese government agreed to construct bridges over the two rivers. As river Padma is a mighty one having strong current, Japan began Padma River surveying and they started construction works on river Rupsha at her request.

In 2001, Japan submitted the survey report to Bangladesh on construction of a bridge on river Padma. In the Japanese survey, Mawa point of Munshiganj was selected as the site for Padma Bridge construction.

On the basis of the survey, the premier formally laid the foundation stone of the Padma Bridge at Mawa in Munshiganj on Jul 4 in 2001.

But, Awami League could not come to power in 2001 elections. After assuming power, the BNP-Jamaat alliance government stopped the bride construction programme at Mawa point and asked the Japan government to conduct survey again for Padma Bridge at Aricha point in Manikganj.

After assuming power in 2009 again, the Awami League government included Padma Bridge construction in the list of highest priority.

On the 22nd day of assuming office, New Zealand based consultant firm Monsel Eicom was appointed to prepare complete design of Padma Bridge.