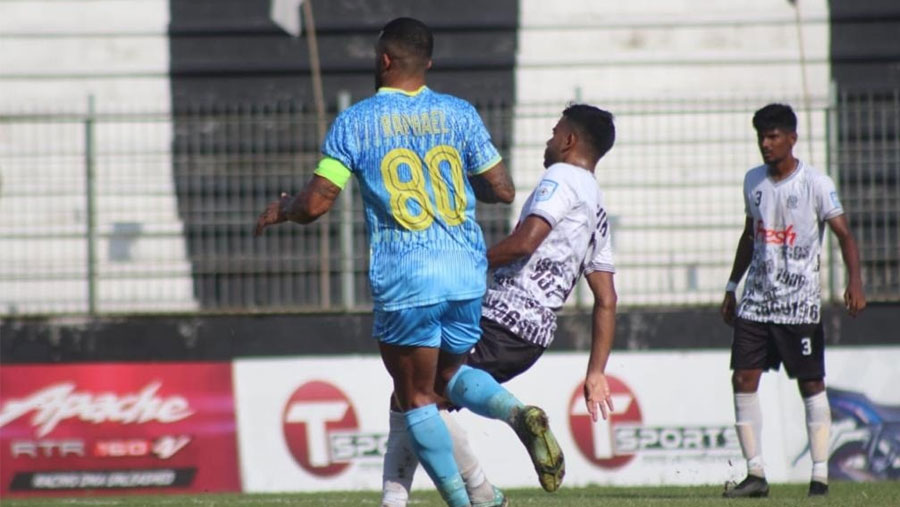 Brazilian forward Dorielton Gomes celebrated his return to Bangladesh Premier League with a brace, powering Dhaka Abahani to an emphatic 4-2 win over archrivals Mohammedan Sporting Club in an action-packed encounter at the Shaheed Dhirendranath Datta Stadium in Cumilla on Wednesday (Jun 22).

The triumph means the Dhanmondi outfit stretched their unbeaten run against the Black and Whites to six league matches and also saw them reach 35 points from 16 matches, shrinking the gap with leaders Bashundhara Kings to six points. Meanwhile, sixth-placed Mohammedan remained glued to 22 points.

Having missed the last six matches, including the AFC Cup encounter against Mohun Bagan, fit-again Dorielton returned to the staring eleven for the Sky Blues and immediately demonstrated his prowess again, as he did by scoring in his last league outing against Bashundhara Kings in a 2-2 draw in April.

The 32-year-old picked up where he left off, slotting home a brace after Costa Rican forward Daniel Colindres opened the scoring in the eighth minute to set the tone for the high-voltage match, which saw all six goals scored in the first half and also saw Abahani go down to 10 men for the last 10 minutes.

Colindres provided a seventh-minute lead by scoring directly from a corner kick before Dorielton latched onto a pass into the box and fired in at the near post to double the lead.

Despite those setbacks in the first 10 minutes, Mohammedan appeared determined to fight and pulled one goal back in the 18th minute. After exchanging over 20 passes, a cross from Alamgir Molla found Malian striker Souleymane Diabate at the far post, who cushioned the ball into the far post with an outstretched leg.

Abahani regained their two-goal cushion 25 minutes later, when substitute Emon Babu drove home from the six-yard box after the goalkeeper parried an effort from Colindres straight to him.

But Mohammedan again sparked excitement by scoring two minutes into stoppage time as Shahriar Emon perfectly met a sweeping cross-field ball from Anik Hossain inside the box. Emon went past the first defender with his first touch before bamboozling two more and firing powerfully into the net.

However, their joy was short-lived as Abahani struck their fourth in the last minute of stoppage time, with Dorielton rising high at the near post and heading home a Colindres corner.

Abahani played the last 10 minutes with 10 players after defender Rezaul Islam picked up his second yellow card but Mohammedan could not hit back, eventually succumbing to their 13th defeat in 28 league matches against Abahani.

In the day's other match, Bangladesh Police defeated Uttar Baridhara 3-2 to join Mohammedan on 22 points. Baridhara are tenth with 12 points from 16 matches.