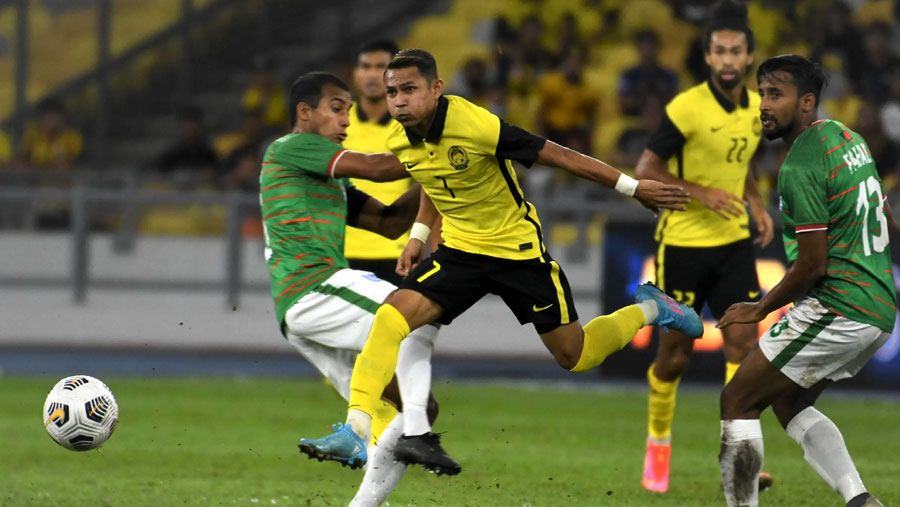 Bangladesh’s hopes of ending the AFC Asian Cup Qualifier 2023 campaign on a positive note got crushed by hosts Malaysia, as they lost their final Group E match by 4-1 at the Bukit Jalil National Stadium in Kuala Lumpur on Tuesday (Jun 14).

Mohammad Ibrahim once again was Bangladesh’s lone scorer of the match while Safawi Rasid, Dion Cools, Syafiq Ahmad and Darren Lok scored one goal each for Malaysia.

The hosts put Bangladesh under pressure from the start. Malaysia were rewarded for their early dominance in the 16th minute when Safawi converted from the penalty spot to put the hosts ahead.

Bangladesh levelled the margin in the 31st minute, when Ibrahim headed the ball home from a free kick. The goal was almost identical to the one he scored in Bangladesh’s previous match against Turkmenistan, which they lost 1-2.

Malaysia regained their lead just seven minutes later when Dion found the back of the net.

Bangladesh went into half-time with hopes of a comeback as the match was still not out of their grasp.

But the hosts didn’t allow Bangladesh to bounce back as in just the second minute of the second half Syafiq sent the ball past Bangladesh’s goalkeeper Anisur Rahman Zico to make it 3-1.

Darren then struck the final nail in Bangladesh’s coffin by scoring in the 73rd minute.

With the result, Bangladesh finished dead last in their four-team group with three defeats in three matches.