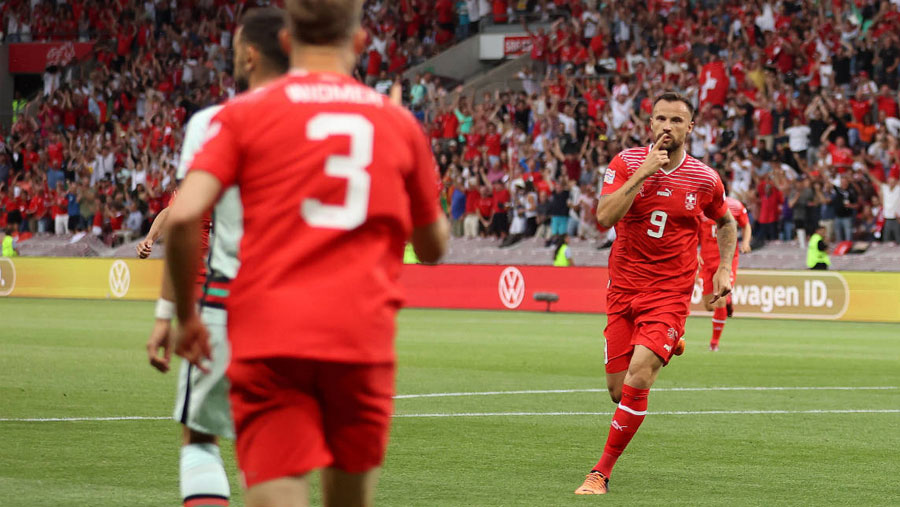 A first-minute strike by striker Haris Seferovic earned Switzerland a 1-0 victory over Portugal on Sunday (Jun 12) as Murat Yakin's side grabbed their first win in this year's Nations League. Seferovic put Switzerland ahead 57 seconds into the clash at Stade de Geneve with a close-range header after defender Silvan Widmer set him up with a precise cross inside the area. Inaugural 2018-19 Nations League winners Portugal levelled through forward Rafael Leao in the 18th minute but his effort was disallowed for offside.

Haris Seferovic scored the fastest goal in the Nations League's short history to give Switzerland victory over Portugal in Group A2. The Benfica forward headed in after just 55 seconds in Geneva to get the hosts off the mark in this campaign.

Seferovic dragged another effort wide in the second half but Switzerland needed goalkeeper Jonas Omlin on form. He saved from Danilo Pereira, made a smart stop to deny Goncalo Guedes and thwarted Bernardo Silva's from range.

Joao Cancelo curled over and Diogo Jota's header was also saved by Omlin as Portugal – without Cristiano Ronaldo, who was rested – tried and failed to pull level.

They slip to second in the standings after Spain's victory over the Czech Republic.