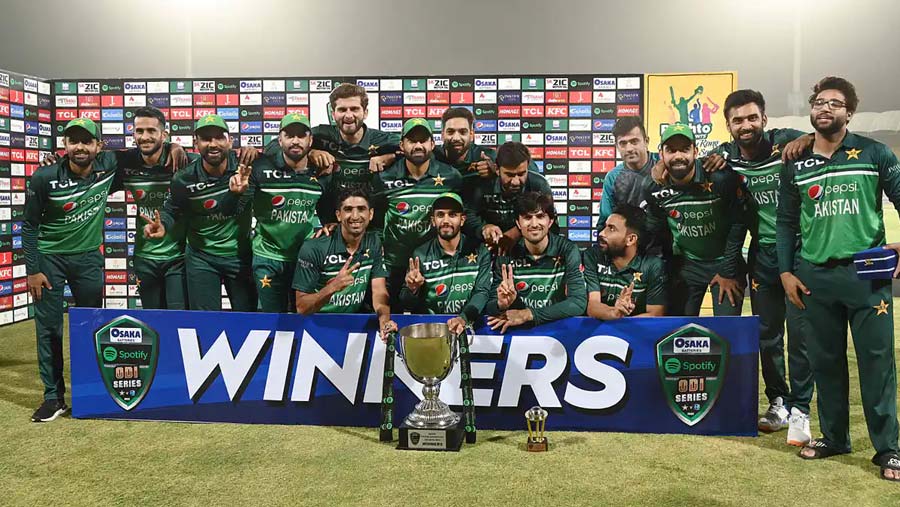 Allrounder Shadab Khan hit a fighting half century before taking four wickets to anchor Pakistan's 53-run win over the West Indies in the third and final day-night international in Multan which was interrupted by a dust storm.

Opener Imam-ul-Haq scored a brilliant 68-ball 62 but there was a rare failure for world number one ODI batsman Babar Azam who fell for one off three balls.

Shadab's legspin then fetched 4-62 to dismiss the visitors for 216 in 37.2 overs, giving Pakistan 30 invaluable points in the ODI Super League, a qualification round for next year's World Cup in India.

The 3-0 clean-sweep lifted Pakistan to 90 points, fourth in the 13-team ODI League table while the West Indies are fifth with 80.

A dust storm during Pakistan's innings reduced the match to 48 overs-a-side but that could not stop Pakistan from taking a tenth consecutive ODI series win over the West Indies.

Pakistan won the first match by five wickets and the second by 120 runs, also played in Multan.

When Hosein and Romario Shepherd added 49 for the eighth wicket the visitors threatened a comeback but both fell within 12 runs to end a miserable series.

Left-arm spinner Mohammad Nawaz had Brooks and Keemo Paul (21) to finish with 2-56.

Earlier, it was part-time bowler Pooran who hit Pakistan hard.

Pooran turned his arm over only for the second time in his 43-match ODI career to take 4-48 after Pakistan slumped from 85 without loss to 117-5, having won the toss and opted to bat.

The innings seemed to have fallen apart with Babar Azam's rare failure for one but Shadab wielded his bat to the best effect.

Shadab hit three sixes and four boundaries off 78 balls before being bowled in the last over.

He improved upon his 54 against New Zealand in Wellington in 2018.

Pooran chipped in with the wickets of Zaman, Haq, Mohammad Rizwan (11) and Mohammad Haris (nought) off just 25 balls, having never taken more than one wicket in his first class career.

Haq smashed seven boundaries and a six off 68 balls for his 14th ODI half century. He became only the second batter to score seven or more fifties in successive ODIs.

Former Pakistan great Javed Miandad, celebrating his 65th birthday on Sunday, set the record for most fifties in successive ODIs with nine, scored in 1987.

In between Pooran's destruction, Azam fell leg-before to spinner Hayden Walsh, having hit a century and 77 in the first two matches.

Shadab added 84 with Khushdil Shah (34) for the sixth wicket and 40 for the eighth with Mohammad Wasim who made six.