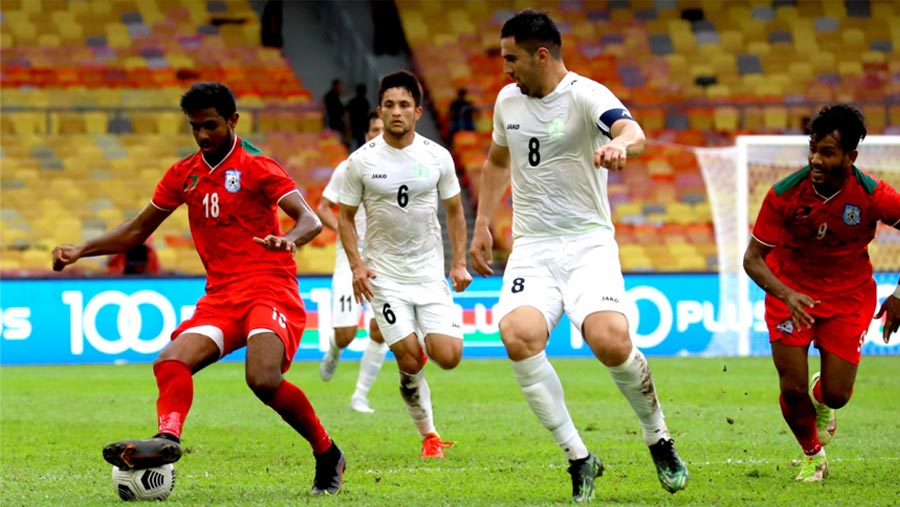 Despite a superb performance, Bangladesh went down 1-2 defeat to Turkmenistan in their second group E game of AFC Asian Cup 2023 qualifiers on Saturday (Jun 11) at the Bukit Jalil National Stadium in Kuala Lumpur, Malaysia.

Forward Annadurdyyew and substitute stryker Arslan Amanov's scored one goal each for Turkmenistan while midfielder Mohammad Ibrahim netted the lone goal for Bangladesh. The match was locked 1-1 at the breather.

Turkmenistan went attack early and got the reap in the 7th minute as Altymyrat Annadurdyyew sent the bal home with placing shot from Inside the D-box after utilizing a corner from the right flank.

However, Turkmenistan's lead lasted for few minutes as Ibrahim brought back Bangladesh in match in the 12th minute with a perfect header, ending Bangladesh's goal drought under the new coach Javier Cabrera.

The boys in red and green could have finished the first half with lead if they would not miss some easy scoring chances in the first half.

After resumption, Turkmenistan continued their onslaught by playing aggressive football. The Central Asian country is also ahead of Bangladesh in ball possession.

Coach Javier Cabrera's men, who opened their campaign with a 2-0 defeat to mighty Bahrain on Wednesday last, also fought neck to neck, but lacks of little luck they eventually deprived from point as substitute Arslan Amanov's scored the second goal in the 77th minute, denying Bangladesh from securing any point and also ended their hope of qualifying for next year's Asian Cup.

Bangladesh got their best scoring chance in the 88th minute when Tutul Hossain Badsha's well-judge shot before the open net missed the target, off a free kick from Jamal Bhuyan.

Bangladesh which placed at group E along with Bahrain Turkmenistan and Malaysia in the AFC Asian Cup, will play their thir and last match against host Malaysia on Jun 14.