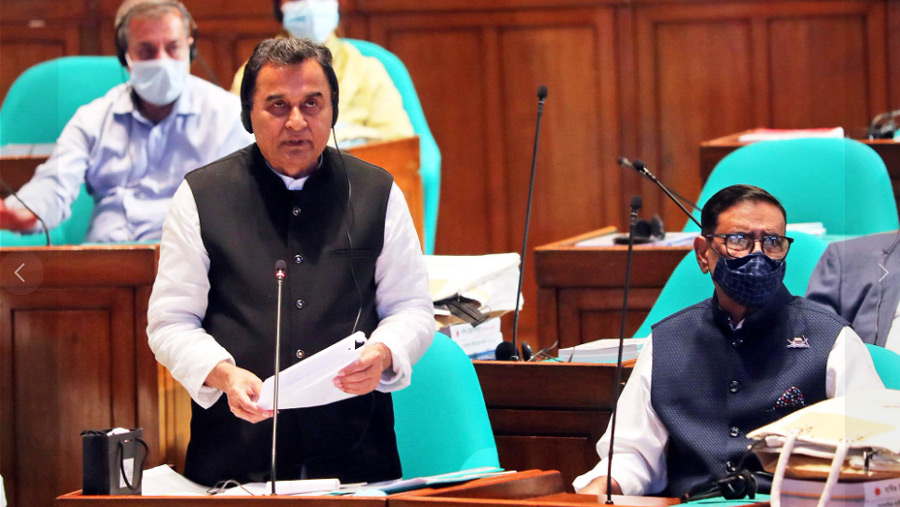 Finance Minister AHM Mustafa Kamal on Thursday (Jun 9) placed a Taka 6,78,064 crore proposed budget for FY23 at Jatiyo Sangsad considering recovery from the pandemic, the Russia-Ukraine war and also keeping ahead six key challenges with containing inflation as the major one.

“Certainly, we shall be able to transform Bangladesh into a hunger and poverty-free society by achieving SDG in 2030, a higher-middle income country by 2031, a knowledge-based, happy and prosperous developed country by 2041 and a secured delta by 2100,” said Kamal while placing his 208-page budget speech for FY23 lasting over two hours from 3:05 p.m.

Considering the lagged effects of the Covid-19 and the protracted crisis arising from the Russia-Ukraine conflict, Kamal set up a GDP growth target of 7.5 percent in the next fiscal year while to contain inflation at 5.6 percent.

“You are well aware that Bangladesh has changed a lot over the last five decades. The only thing that hasn’t changed is the everlasting ideals of the Father of the Nation and his robust presence in all the spheres,” noted Kamal.

The title of the budget for the next fiscal year is “Return to the Path of Development; Leaving the Covid-19 Behind”.

The Finance Minister, wearing white Panjabi and Pajama with “Mujib Coat” placed his 4th budget in a row and also the overall 51st budget of the country.

Split in 11 chapters before the concluding remarks, Kamal dedicated a special chapter to Prime Minister Sheikh Hasina with the title “Sheikh Hasina: The Story of a Phoenix” where he depicted the life-long dedication of the Premier in taking Bangladesh into a respectable position in the global arena.

President Md. Abdul Hamid witnessed the deliberation of budget speech from the gallery at the Jatiyo Sangsad.

Besides, Leader of the House and Prime Minister Sheikh Hasina was also present at the August House.

Kamal said the on the whole, the budget of FY23 has been prepared keeping in mind the recovery of country’s economy from the economic crises caused by the Covid-19 pandemic and the Russia-Ukraine war, implementation of the incentive packages provided by Prime Minister Sheikh Hasina, timely implementation of priority projects, expansion of social safety nets, ensuring education and training, creation of massive employment, providing agricultural subsidies, and above all sustaining the economic development of the country.

However, he said at least three important issues have been carefully considered in preparing the budget structure for the next year.

“We have been working on ways to deal with the direct and indirect negative effects of the second wave of the corona pandemic in different parts of the world that are posing challenges on various sectors of our economy,” he added.

Kamal said the government crafted strategies for the coming days considering the potential economic risks posed by the Russian-Ukraine conflict.

Besides, he said the likelihood of the occurrence of ‘imported inflation’ due to the rise in global prices of all major imported commodities including petroleum oil, and the disruption in the supply chain worldwide has also been carefully considered.

“Meeting the public demand, satisfying the needs created in the health sector and bringing the population under the vaccine coverage have also been considered,” he added.

The Finance Minister outlined that the major challenges for the next fiscal year would be: 1) containing inflation and enhancing domestic investment; 2) financing additional subsidy required for the increased price of gas, power and fertilizer in international markets; 3) utilizing funds available through foreign assistance and ensuring timely completion of high priority projects of ministries/divisions; 4) ensuring timely completion of projects in education and health sectors; 5) increasing collection of local Value Added Tax and raising the number of individual tax-payers and 6) maintaining stability in the exchange rate of taka and keeping foreign exchange reserves at a comfortable level.

However, considering the price trend of oil, gas, and fertilizer in the international market, the estimated subsidy/incentives spending can be 15-20 percent higher than the initial estimates, which may pose a challenge in the budget management for the next fiscal year, he cited.

The tax-free income ceiling for the individual taxpayers in the next fiscal year will remain unchanged at Taka 3 lakh.

For the physical infrastructure sector an allocation of Taka 2,00,860 crore has been proposed which is 29.62 percent of the total allocation.

The Finance Minister said one of the priorities of the government is to provide emergency financial assistance to the low-income people who become jobless or their income is reduced due to natural disasters like floods, flash- floods, storm surges, hail storms, cyclones or other financial crisis.

In FY22, the government established a fund called ‘Fund for Managing the Shocks of Natural Disasters’ where an allocation of Taka 5,000 crore has been proposed for this fund.

Highlighting the government’s success in the vaccine drive, he said so far, a total of 12.9 crore first doses, 11.8 crore second doses and 1.5 crore booster doses have been administered.

In the budget, the government offered Bangladeshis a scope for legalising their unreported assets outside the country without facing any questions in the next fiscal year.

They will have to pay taxes ranging from only 7-15 percent in order to avail of this opportunity.

The opportunity will be in force starting from the first day of the new fiscal and will end on Jun 30, next year.

The Finance Minister also revealed that the universal pension scheme would take off in July next fiscal year.

All citizens aged between 18 and 50 will be entitled to the benefits of the move.

About the country’s efforts in ensuring smooth transition from the LDC’s, he said Bangladesh will have to utilise with farsightedness the period from 2022 to 2026 for its preparation to the graduation from LDCs so that Bangladesh can move forward even after graduation and sustain its position as a graduated country.

“To that end, the ongoing development process must continue to ensure smooth graduation. The Government of Bangladesh is fully committed to make this graduation smooth and sustainable. In this context, various policies, strategies, programs, and measures have been adopted,” he added.

Kamal said due to the courageous leadership, patriotism, commitment of Prime Minister Sheikh Hasina to the people of the country alongside her far-sighted economic philosophy, Bangladesh is now the 41st largest economy in the world.

According to the Center for Economic and Business Research (CEBR), a British economic research organization, Bangladesh will become the 25th largest economy in the world by 2035 if economic growth continues.

“Bangladesh has emerged as the world’s wonder in the journey towards development and prosperity.

The world leaders today are now in all praise for what Bangladesh has achieved. Indeed, the role of the Awami League and the people’s leader Sheikh Hasina are at the heart of these remarkable achievements,” he noted.

To offset the Covid-19, he informed that the government has so far launched 28 financial and incentive packages worth Tk 1 lakh 87 thousand 679 crore and are successfully implementing them.

Meanwhile, the implementation of these 28 incentive packages by the government has so far directly benefited about 73 million people and about 1,72,000 organisations.

In this regard, the Finance Minister assured that the government would continue the initiatives taken to address Covid-19 and economic recovery in the coming fiscal year.

“Now, in the third year of the pandemic, our priority will be to sustain the economic recovery by maintaining the trend of income generation and job creation and thus put the economy on a solid foundation.

Therefore, we will continue to implement incentive programmes in the next fiscal year,” he added.

He also told the House that the next fiscal year would be the last year to overcome the effects of pandemic.

“Thus we shall touch the fringe of golden Bangla that was ingrained in the heart and soul of Bangabandhu Sheikh Mujibur Rahman Insha Allah.” Kamal expressed his strong resolve in concluding remarks.