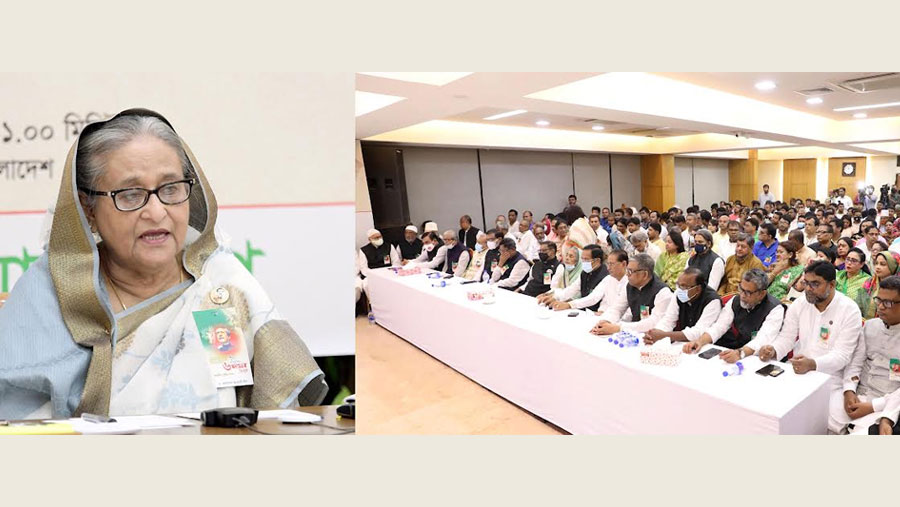 Prime Minister Sheikh Hasina on Tuesday (Jun 7) said the Six-Point Demand raised by Bangabandhu Sheikh Mujibur Rahman was the “Magna Carta” of Bangalees as it had prepared the people for independence of the country.

The premier was addressing a discussion marking the Six-Point Day organized by Bangladesh Awami League at its central office in the city’s 23 Bangabandhu Avenue.

She chaired the event, joining virtually from her official residence Ganabhaban in Dhaka, local media reported.

She said, "It was achieved through our blood, Manu Miah's blood, and in the letters of the blood of the Six-Point."

Father of the Nation Bangabandhu Sheikh Mujibur Rahman had firm confidence which actually came from his courage, honesty, belief and foresight, she said, adding: "That is why we have attained independence."

Mentioning that Bangabandhu himself formulated the Six-Point Demand, she said ex-mayor Mohammad Hanif, the then personal assistant of Bangabandhu during his service life in Alfa Insurance, had written it using typewriting machine in both Bangla and English as Bangabandhu by his own verbally telling him to compose it.

At the outset of the event, one minute silence was observed to pay tribute to the martyrs of six-point and other movements as well as deceased in Sitakunda fire.

The PM said Bangabandhu had to face strong opposition, when he went to present the Six-Point in a conference, by the then West Pakistani politicians and some Bangalis (East Pakistani). Yet he published some points to the media.

Later he (Bangabandhu) again revealed it (Six-Point) partly before the media at the airport after returning from the West Pakistan and then published it with full elaboration at a press conference after a day, she said, adding "It will not be found in the world that a demand becomes so popular within a short duration."

She continued that the Awami League had taken massive initiative to disseminate it (Six-Point) across the country through leaflets, banners and posters.

Sheikh Hasina went on saying that Bangabandhu traveled to each area of the country (19 districts and sub-districts) within 32 days and addressed 35 rallies as well as organized councils of different units of Awami League where those were due.

In 1961-62, Bangabandhu also formed "nucleus" (committee) by Bangladesh Chhatra League across the country to disseminate the message of independence, she said.

The PM said the Pakistani government started to file cases against Bangabandhu wherever he delivered speeches in favor of the Six-Point. Eight cases were filed against him but he didn't stop rather continued his meeting by taking bail one after another, she added.

She said later Bangabandhu was arrested, and other leaders were also arrested whoever took the charge of acting president and general secretary of the party.

Sheikh Hasina said that her mother Bangamata Begum Fazilatun Nesa Mujib played an active role at that time and organized Awami League leaders and activists, especially the student and labour leaders, for movements escaping the vigilance of Pakistani intelligence.

She added that labourers from Adamjee and Narayanganj joined the movement and 11 persons including Manu Miah died when police opened fire to stop a procession in the city's Tejgaon area.

She said "Actually, the support to Six-Point was written through the letter of blood."

The Awami League President said when the movement was going on, another conspiracy was hatched, and a small group of bigwig leaders of Awami League emerged with the "Eight-Point" formula to bypass the Six-Point.

"A meeting was held at our house and heated debate took place whether it would be Six-Point or Eight-Point, but my mother was rigid on the Six-Point and told them 'No changes of Six-Point," she said, adding "Actually a few bigwigs were in favor of eight point formula but all other leaders were in support of Six-Point."

It was very hard to face that conspiracy but "My mother had taken bold steps to foil it" she added.

The PM said later Bangladesh Chhatra League formed "Chhatra Sangram Parishad" and declared 11-Point with the Six-Point that took the movement to its peak in all educational institutions across the country.

She said after the "mass upsurge", again some leaders of Awami League became active and Ayub Khan called a "round table" meeting and sent an airplane to carry leaders to the then West Pakistan.

She added the Awami League leaders went to Cantonment Thana where Bangabandhu was detained and asked him to join the meeting on parole.

She continued, "But, again my mother stood bold and said parole will not do rather he (Bangabandhu) could only go to meetings when he becomes free after withdrawal of the case."

Apprehending the conspiracy, Sheikh Hasina said, her mother asked her to go to Cantonment Thana immediately to meet her father.

She said that she went there and found Awami League's bigwigs including Dr Kamal Hossain, Barrister Moudud Ahmed, Barrister Amirul Islam, Tajuddin Ahmad and Momin who were pressurizing Bangabandhu to go out on parole and they were also ready to pick him.

"But, I, the daughter of Bangabandhu, was not allowed to meet him, rather many leaders were there," she said, adding, "After waiting for a long, when Bangabandhu came to the balcony, he saw me and called me to go to him."

"He asked me to convey my mother's message verbally rather than giving him any paper. I told him that mother suggested him not go out on parole in any way as people and all circumstances outside were in favor of him," she added.

She went on saying that the leaders then returned from there and met my mother at home. "They rebuked my mother and told her that she will become a widow because of this decision, but my mother told them that he (Bangabandhu) will return alive after withdrawal of the case."

Sheikh Hasina told the party leaders and activists that they could understand the conspiracies of party insiders to some extent if they looked back at the scenarios in 2007.

Turning to the recent situation caused by Covid-19 pandemic and Ukraine-Russia war, the Prime Minister urged the people of the country to take austerity measures amid the high inflation rate and price hike of goods across the world.

"Yes, it is right that prices of goods have shot up to some extent. But, it is still uncertain how much the prices would soar further. It is not only in Bangladesh, but also throughout the world. Rather we've been able to keep these under control to some extent. We've been trying our best," she said.

Mentioning that it seems this war will not end so soon, she said, "We, all, will have to be economical. We'll have to pay attention so that food will no way be wasted," she said.

Pointing to the readymade garment workers' movement to raise salary, the premier said they might lose their jobs if any unrest is created in the sector now in this tough time when the purchasing power of the people is declining in the export markers of Bangladeshi apparel.

She added, "If any sort of unrest is created following someone's words, it will harm not only the country but also themselves. Everyone will have to keep it in mind. I think the matter should be informed to the workers and worker leaders."

Sheikh Hasina said the labour leaders will not face any trouble as they will get a good amount of money from instigators. "But what will be the fate of workers? They will be harmed by taking them to the street," she added.

The head of government said her government increased the salary of the apparel workers on several occasions. A worker now gets Tk 8,000-Tk 10,000 a month and other facilities, but the salary was only Tk 1,600 in the past, she added.

She said if anyone wages movement refraining from work and it leads to the shutdown of the factories, the job would also be lost.

"Then they will not get any hike in salary rather they will have to be salary-less. If you don't understand it, we've nothing to do here. Because how much we will give to the private sector?" she said.

Sheikh Hasina said the government has been providing subsidies and has given all sorts of incentives to the garment sector. "It is not possible to provide more than that," she added.

Since the government helped the factories by giving all facilities so that they do not get shut due to fallout of the Covid-19, the factories are now getting work orders, their export increases and can import capital machinery, she said.

She noted that now the workers want to wage different sorts of movements including for salary increment and if it leads to fall in export and shutdown of the factories, the workers will lose their jobs.

"Then what will they do? So, the leaders who incite the movement will have to think about those who provoke them. Because the purchasing power of the buyers in the importing-countries is declining and it is worsening day by day," she said, adding that the prices of goods soared in the USA, Europe and other places and the people are suffering there.

She said many developed countries are now facing difficulties due to high inflation rates amid the global economic recession caused by the Coronavirus outbreak and then Ukraine-Russia war. The inflation rate shot up to even 17 percent in some countries in Europe and over 10 percent in the USA, she added.

Sheikh Hasina said the people have been asked to exercise austerity in the use of electricity and edible oil in England.

"But we've been able to keep the prices of goods under control by providing subsidies as much as possible," she said.

"We've increased our reserve of foreign currencies to $ 48 billion. Now we've been providing subsidies and support to the electricity, gas, agriculture and health sectors drawing the money from the reserve," she added.

The PM asked the people not to keep a single inch of arable land uncultivated amid the global food shortage. "We should arrange (produce) foods at least to the amount needed for ourselves," she said.