Stay beside people with a vow to provide services: PM to physicians 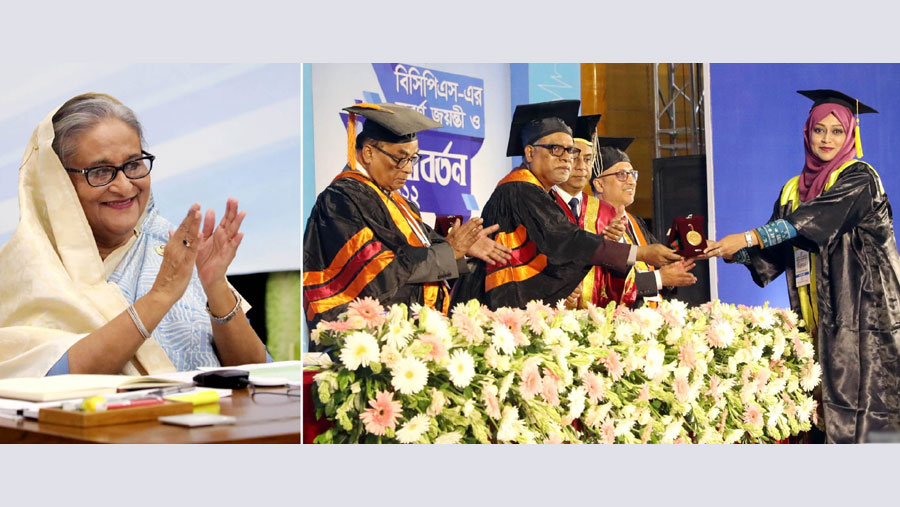 Prime Minister Sheikh Hasina on Monday (Jun 6) called upon the country’s physicians to stay beside people with a vow of providing services as it’s not just a profession.

“It’s not just a profession. You people (physicians) serve people and I want you to stay beside people with this vow of providing services,” she said.

The premier said this while addressing the opening ceremony of the golden jubilee celebration and 14th convocation 2022 of Bangladesh College of Physicians and Surgeons (BCPS) as chief guest at Bangabandhu International Conference Centre (BICC).

Joining virtually from her official residence Ganabhaban, Sheikh Hasina said when a doctor listens to a patient with patience, it gives the patient confidence and helps healing.

She said "In many cases, people are healed by the words of a doctor rather than treatment and medicine as it helps the patient to gain confidence.”

She added it is a reality that a patient gets half healed after hearing the doctor's words.

The PM opined that everyone, whatever profession they belong to, should continue to work imbuing with humanity.

BCPS also gave an honorary fellowship to the Prime Minister Sheikh Hasina. On behalf of the PM, Zahid Maleque received the fellowship and momentous of BCPS’s golden jubilee.

Later, Zahid Maleque, on behalf of the PM, handed over the gold medals among the BCPS fellows during 2017 to 2022 and honorary fellowship to the both local and foreign dignitaries.

At the outset of the event, the theme song of BCPS and a video documentary on the activities of BCPS were screened.

The PM, however, said that Bangladesh has a vast population and that is why huge pressure lies on physicians, but even after that quality medical service needs to be ensured.

She urged the country’s physicians to ensure the quality of medical services so that people would get the international quality treatment.

Sheikh Hasina said the government is working so that the patients can avail the specialized healthcare services through online platforms, staying at their own Upazilas.

“We’re creating the scope so that they (the patients) can get specialized treatment sitting at their own locations and staying in Upazilas,” she said.

She added that her government has installed web cameras in every Upazila hospital.

She said “We’ll improve it (the online services through web cameras) further. We’ve this plan so that they can avail the specialized treatment online.”

She said though the government has already created the scope, it has a plan to improve it further so that the patients don’t need to come to Dhaka, rather can avail the specialized healthcare services staying in their own areas.

The premier stressed the need for more research in health science, improving the quality of healthcare services and raising public awareness about the outbreak of diseases.

“The research in health science is very essential for us. You (the physicians) will pay more attention to the research,” she said, adding that it is also an important thing to keep the people protected from many diseases, which outbreak in the country due to its weather and climate.

She went on saying “If our physicians can do such good jobs going abroad, why won’t they do it in our country? That is my question?”

The PM said her government has been working to ensure international standard healthcare services for the people of the country.

Besides, many medical colleges are being set up both in public and private sectors across the country, she said.

“But, one thing must be ensured and that is the standard of treatment or service for the patients,” she said, adding that the government has recruited a good number of health workers to this end.

Sheikh Hasina said “I would like to make a request that you (physicians) will have to take care of it so that the people of the country will get international standard treatment service.”

Though a doctor needs to provide services to many patients in the country unlike in the foreign lands, it is essential to improve the quality of medicare services here, she added.

She said the physicians will get all sorts of assistance from her in ensuring the proper healthcare services for the people of the country.

Noting that she considers the power as a scope to serve the people of Bangladesh not a matter of enjoyment or leading a lavish life, she said, urging the physicians, irrespective of their locations, to stand beside the people with humanity.

Referring to the philosophy of Father of the Nation Bangabandhu Sheikh Mujibur Rahman, Sheikh Hasina said she has been trying to serve the people keeping the subject of humanity in her mind during governing the country.

“Power is an opportunity for me to serve the people of Bangladesh. Here is no indulgence as Prime Minister. I think it’s an opportunity to meet the basic demands of people,” she opined.

She added “So, you people where you are, what profession you belong to, you will stay beside people with a sense of humanity, and I think you will get the pleasure most in there.”

The head of government said they want to pull Bangladesh ahead in all aspects as all people of the country are meritorious. “Keeping it in mind, I want to create opportunities whatever is needed”, she added.

Mentioning that getting fellowship of Bangladesh College of Physicians and Surgeons is an subject of honor, she urged all the fellows to work for the country and people being imbued with patriotism and utilizing the attained knowledge.

“And to ensure the health services for the people, you will get all possible cooperation from me and I can assure you about it,” she added.

Sheikh Hasina also briefly highlighted the initiatives taken by Bangabandhu during his three and a half years of tenure for the country’s health sectors immediately after the independence.

Apprehending the necessity, she said, the Father of the Nation had established BCPS so that country’s physicians can attain the scope of higher study with low cost and people could get quality health services.

Following the footsteps of Bangabandhu, she said that her government has also established different specialized institutions in the country so the physicians can continue their study.

She also reiterated her government’s determination to set up medical universities in all divisional headquarters.