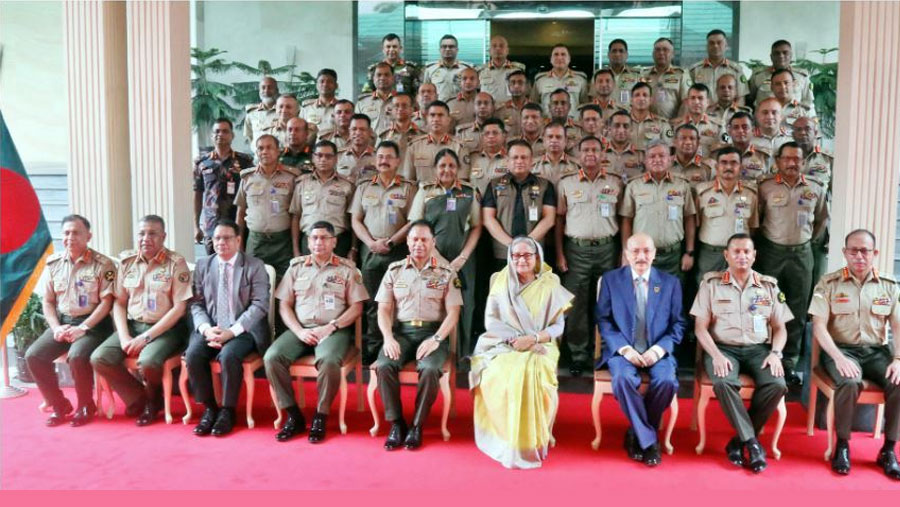 Prime Minister Sheikh Hasina on Monday (May 30) said the decision of building the much awaited Padma Multipurpose Bridge, which is set to open for traffic on Jun 25 next, brightened the country's image in the world.

"The decision to construct the Padma Bridge by own finance has brightened the country's image in the globe and also accelerated the nation's confidence," she said.

The PM was addressing the Army Selection Board-2022 meeting at the Army Headquarters' Multipurpose Complex at Dhaka Cantonment, local media reported.

The World Bank stopped financing to construct the bridge without holding board meeting with the connivance of a person bringing a false corruption allegation which was later proved baseless, the Prime Minister’s Press Secretary Ihsanul Karim told media quoting Sheikh Hasina as saying.

"We have to march ahead with self confidence maintaining the economic condition (Bangladesh has got recognition of a developing nation from a least developed one) that we have achieved," the premier said.

Referring to the army's various nation building and social activities, she said Bangladesh Army has always made contributions to the country's overall development that included building infrastructure.

The PM asked the army to gain the confidence and trust of the masses through their activities.

She said all including the armed forces, police and BGB have stood beside the people in their hardship during the Covid-19 pandemic.

About the government measures regarding mitigation and adaptation of the climate change impact, she said they have built flats at Khuruskul in Cox's Bazar to provide shelter to the climate refugees.

She reiterated that none would remain landless and homeless across the country as her government has provided houses with lands free of cost.

The premier said Bangladesh is the only country in the world from where the allied forces went back to their country within three months under the dynamic leadership of Father of the Nation Bangabandhu Sheikh Mujibur Rahman.

Mentioning the discrimination between the then East (now Bangladesh) and West Pakistan in every sector particularly in government services, she said only one colonel from erstwhile east Pakistan was in the Pakistani military services.

"But, now many generals are in the Bangladesh Army and it is made possible as Bangladesh has achieved independence," she said.

The PM said officers with professional competency, excellence, honesty, and patriotism should be given promotion for enhancing their leadership capacity above personal liking and disliking.

"You have to keep in mind that selection of professionally efficient leadership is possible through neutral evaluation and you should give importance on high moral character for promotion. I hope you will discharge duty with honesty and dedication," she said.

The officers having strong mentality, honesty and other qualities for leadership with loyalty are qualified for higher promotion, she said.

"So, the officers who have a successful leadership record in military life should be considered for promotion," she added.

Mentioning that members of the army always stand beside the people, Sheikh Hasina said they are playing a very praiseworthy role in the UN peacekeeping missions which brightens the nation's image at global level.

The PM said Father of the Nation Bangabandhu Sheikh Mujibur Rahman had taken various initiatives including the construction of Military Academy in Cumilla in 1972 to build a developed, professional and trained force soon after the independence.

Bangabandhu also formulated a defence policy in 1974, she said.

Her government has been continuing the development and modernisation process of the armed forces by formulating the "Armed Forces Goal 2030" following the Bangabandhu's defence policy, she added.