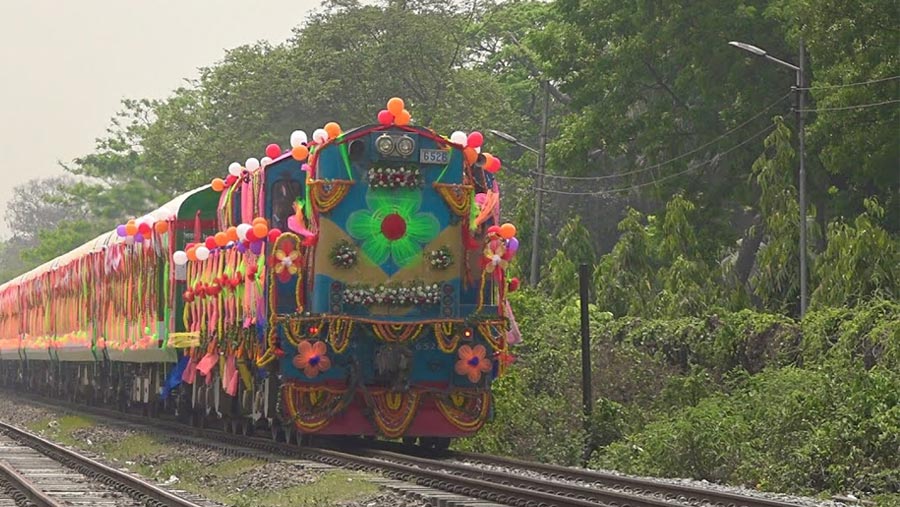 All is set to start operation of 'Mitali Express', the third India-Bangladesh train service on Wednesday (Jun 1) from New Jalpaiguri station in West Bengal, India to Dhaka Cantonment station in Bangladesh.

The Bangladesh railway minister arrived in New Delhi on Saturday (May 28) on a week-long official visit to India. Apart from flagging-off the train, the minister will visit Lucknow, Varanasi, Raebareli and Tughlakabad to inspect some railway coach factories there.

Meanwhile, State Minister for Railways of India Darshana Jardosh on Sunday inspected the New Jalpaiguri Railway Station in West Bengal ahead of flagging-off the 'Mitali Express'. She reviewed the station operations, public service and maintenance of cleanliness at the station.

"Conducted an inspection visit of New Jalpaiguri Railway Station of Northeast Frontier Railway in West Bengal. Reviewed the station operations, public services and maintenance of cleanliness at the Railway Station," she tweeted.

The minister stated that the Mitali Express, in addition to bilateral connections, will help to bolster tourism prospects and in the next few days, a hospital, shopping malls and low-cost hotels will be constructed in the area to help people navigate around the station, media reports say.

It will only stop for 10 minutes each at Haldibari, the last station on the Indian side, and Chilahati – which is the first station on the Bangladesh side – for the change of drivers. Otherwise, it does not have any other stoppage.

During its return journey, Dhaka Cantonment – New Jalpaiguri Mitali Express will also run two days a week – on Monday and Thursday, which will leave Dhaka Cantonment at 21:50 hours (BST), the CPRO added.

They added the train tickets for this journey will be available at the overseas Passenger Reservation System counters at New Jalpaiguri Station and Kolkata Railway Station.

Meanwhile, the other two Indo-Bangladesh passenger trains – Maitree Express and Bandhan Express, whose operations were disrupted due to Covid-19 restrictions, started their operations on Sunday.

Maitree Express, which began service in 2008 is the first train to run between the two countries since the British partitioned India in 1947. Bandhan Express began service later that year.