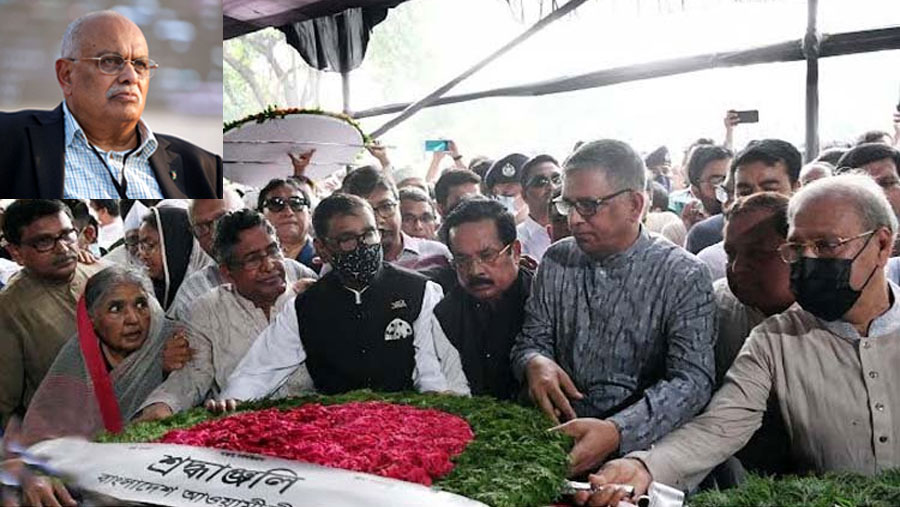 Prominent journalist and lyricist Abdul Gaffar Chowdhury was laid to rest at 5 p.m. on Saturday (May 28) at Mirpur Martyred Intellectual Graveyard in Dhaka. He was buried beside the grave of his wife Selima Afroz Chowdhury following his last Namaz-e-Janaza was held at Jatiyo Press Club (JPC) at 4 p.m.

People from all walks of life have paid glowing tributes to Language Movement veteran, prominent columnist and journalist Abdul Gaffar Chowdhury at the Central Shaheed Minar in Dhaka.

Abdul Gaffar Chowdhury's body was taken to the Central Shaheed Minar at around 1 p.m. to allow the people to have the last glimpse of this famous journalist and columnist, local media reported.

The 88-year-old Abdul Gaffar Chowdhury, best known for writing the lyrics of "Amar Bhaiyer Roktey Rangano", died at a hospital in the U.K. on May 19. His body was brought by air to Dhaka on Saturday morning. He received a 'guard of honour' as a freedom fighter while a moment of silence was observed to commemorate his passing.

Then the Shaheed Minar filled with the sound of his song 'Amar Bhaiyer Rokte Rangano Ekushey February, Ami Ki Bhulitey Paari?' (My Brother's Blood Spattered 21 February, Can I forget?) as a tribute both to its lyricist and the brave Language Martyrs.

Then, the speaker of the Jatiyo Sangsad Dr Shirin Sharmin Chaudhury paid tribute to him by placing a wreath.

On behalf of Dhaka University led by its Vice-Chancellor Dr Akhtaruzzamn and Pro-VC ASM Maksud Kamal and on behalf of Bangla Academy, Swadhinata and Ekushey Padak winning writer Selina Hossain paid tributes to the columnist.