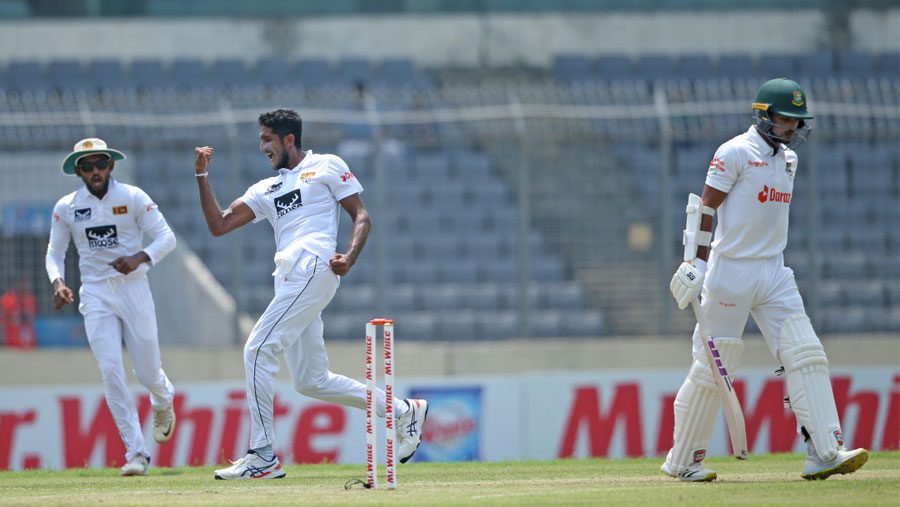 Sri Lanka crushed Bangladesh by 10 wickets in the second cricket Test to win the series 1-0 after the host team collapsed from 156-5 to 169 all out in its second innings on Friday (May 27).

Sri Lanka easily reached the target on the fifth and final day to finish 29-0 in three overs with Oshada Fernando hitting 21 off only nine balls. Captain Dimuth Karunaratne was 7 not out.

Fast bowler Asitha Fernando did most of the damage for Sri Lanka’s bowlers, registering his first 10-wicket haul in a match with 4-93 in the first innings, followed by 6-51.

Resuming the day on 34-4 and still needing 107 runs to make Sri Lanka bat again, the Tigers lost Mushfiqur Rahim (23) in the eighth over of the day when Kasun Rajitha (2-40) bowled him with a delivery that kept low.

Allrounder Shakib, who took 5-96 in the first innings, counterattacked to keep the scoreboard ticking.

Liton, after scoring 88 runs in the drawn first Test and a career-best 141 in the first innings of this Test, went slowly but smoothly to deny Sri Lanka bowlers’ quest for another wicket.

The wicketkeeper-batter pushed left-arm spinner Praveen Jayawickrama through cover for a single to bring up 2,000 runs in his 33rd Test.

Shakib reached his 27th half-century off 62 balls, whipping a delivery from off-spinner Dhananjaya de Silva through midwicket for a boundary on the stroke of lunch.

But soon after reaching his 13th fifty off 130 balls, Liton gave a return catch to Fernando and it sparked the collapse.

Bangladesh’s hopes of saving the Test took a big hit when Shakib edged a delivery from Fernando to wicketkeeper Niroshan Dickwella after hitting seven fours in his 72-ball knock.

Fernando then cleaned up the tail to give Sri Lanka a small target to chase.

Bangladesh chose to bat first and scored 365 in the first innings. Sri Lanka took control of the Test and series after replying with 506.