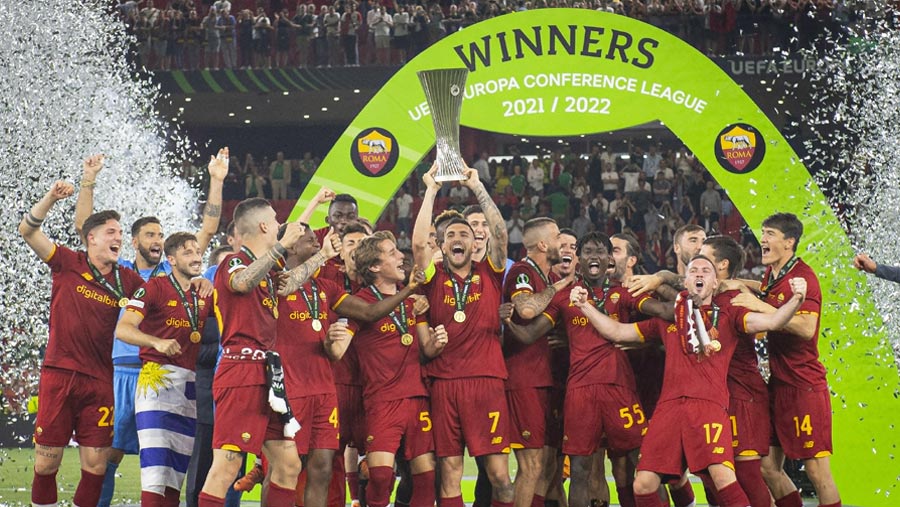 Jose Mourinho made European football history as Roma won the inaugural Europa Conference League with a 1-0 win over Feyenoord in the final on Wednesday (May 25). A toe poke from Nicolo Zaniolo in the first-half of the clash was all that separated the two sides in the Albanian capital of Tirana. It’s Roma’s first European trophy since winning the 1961 Inter-Cities Fairs Cup – a tournament considered to be the precursor to the UEFA Cup and Europa League. It’s also the first title of any kind for Roma since winning the 2008 Italian Cup.

Jose Mourinho’s first season in charge of the Italians ended with a trophy after Nicolo Zaniolo chested down Gianluca Mancini’s lofted pass before beating goalkeeper Justin Bijlow with a clever flick.

Mourinho, who has won the Champions League, Europa League and the UEFA Cup, is the first manager to win all of UEFA’s major European trophies.

The Portuguese was criticised after Roma were embarrassed 6-1 in Norway by Bodo/Glimt in the group stage last October.

"This is a competition we believed we could win since the start," Mourinho Sky Sport Italia.

"I knew the moment I arrived what it meant to the people. They had been waiting for something like this. This was not work tonight, this was history. We had to write history. We wrote it."

Feyenoord, whose campaign started in the qualifying rounds back in July, were denied an equaliser when Rui Patricio tipped Tyrell Malacia's attempt on to the bar soon after Mancini inadvertently hit his own post while trying to make a clearance.