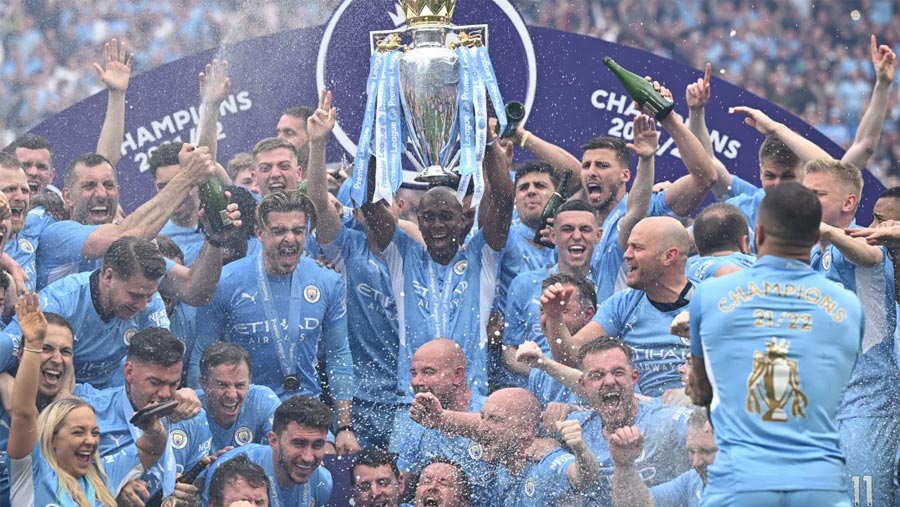 Manchester City clinched a sixth English Premier League title in 11 seasons on Sunday (May 22) by scoring three times in five minutes to come from behind to beat Aston Villa 3-2 in the finale and hold off Liverpool’s challenge.

Manchester City retained their Premier League crown with a 3-2 victory over Aston Villa on Sunday (May 22).

Man City knew would have to match or better Liverpool’s result against Wolverhampton Wanderers on the final day of the season to ensure the Premier League trophy remained in Manchester, and they did just that on a balmy afternoon at the Etihad.

City had actually gone two goals behind before two late goals from Gundogan and one from Rodri earned Pep Guardiola’s men the Premier League title on a day of drama.

This represents the Citizens’ sixth Premier League title win and follows their comfortable victory in 2020/21.

Things were not so simple this time around, with Liverpool going on an incredible run of form to push City all the way until the last day.

Just one point separated the two teams at the start of play following City’s draw at West Ham United last time out, with the matches kicking off simultaneously.

Elsewhere Liverpool held up their end of the bargain too, beating Wolves 3-1 having too come behind at home on the final day.

This is Guardiola's fourth Premier League title since he arrived in the Premier League in 2016, following successes in 2017/18, 2018/19 and last season.