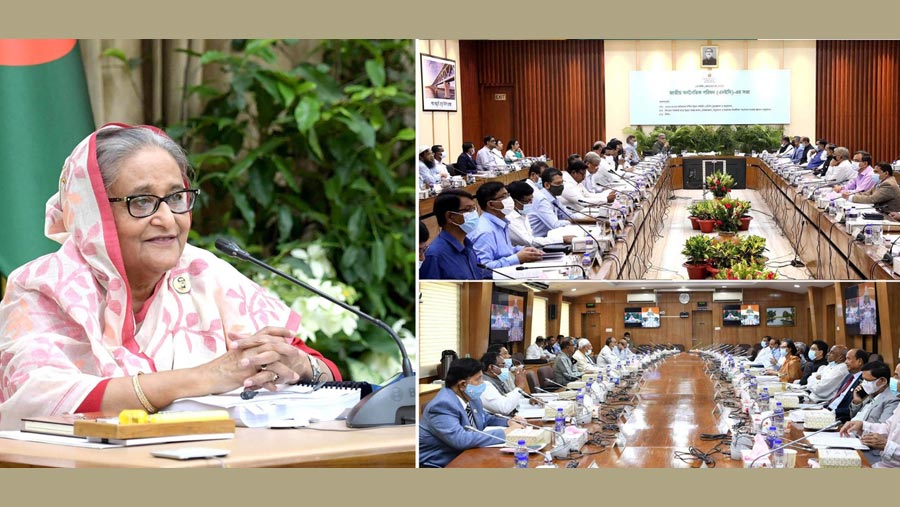 Prime Minister Sheikh Hasina on Tuesday (May 17) reiterated that she returned home with only a goal to bring smiles on the faces of the people.

"I returned home to bring smile on the people's face, because, it was my father's (Father of the Nation Bangabandhu Sheikh Mujibur Rahman) dream," she said.

The premier made this remark while speaking at the meeting of National Economic Council (NEC) at NEC auditorium in city's Sher-e-Banglanagar coinciding with her home coming day. She joined the function virtually from her official residence Ganabhaban in Dhaka, local media reported.

Recalling the day of her return from forced exile on May 17, 1981, Sheikh Hasina said, "When I landed at the airport, I didn't get anyone of my nearest ones (relatives) but received love of millions of people, and that was my only strength and I've moved ahead with this strength."

She also mentioned her visit to every knock and cranny across the country facing barriers after returning home.

She said, "I've got confidence, love and trust of the people of Bangladesh."

The PM said that it was so hard for her to assume power as "both local and international hindrance was there so I couldn't come to power and had to face hurdles each time."

She added that, "But, I didn't stop, I didn't give up, I had a confidence that if I assume power, I can work for the people."

She continued that her Awami League came to power after 21 years through overcoming lots of barriers and hardships.

"As much as I have developed the country today, I think my father's (Bangabandhu) soul will find peace," she said.

Father of the Nation Bangabandhu Sheikh Mujibur Rahman was brutally killed along with most of his family members on Aug 15 in 1975 and his two daughters – Sheikh Hasina and Sheikh Rehana – luckily escaped as they were abroad.

In a national council session of the Bangladesh Awami League on Feb 14-16, 1981, Sheikh Hasina was elected party president.

Regarding the commodity market, the premier said if the Awami League was not in power, now there would have been fighting on the street for the essential commodities.

She noted: "A section of people will criticise, above all I will say as Awami League is in power it has been possible to control (prices of essentials) to some extent. If any other else was in power, there would be fighting on the street but that did not happen. We've been able to free the country from that."

Sheikh Hasina said the government is trying to increase production using the country's fertile land and people to meet the domestic demands.

"For this, I called upon all not to spare a single inch of land from cultivation. We will produce our own food for us and to help others, and we can do that. We have to motivate people that way," she said.

Regarding the ADP for the next fiscal, the head of the government asked the concerned authorities to set the priority for implementation of the projects which is immediately essential to avoid unnecessary pressure on the economy.

She added: "We have to remain cautious in spending public money as the world is passing through an economic recession."

She stressed maintaining austerity in every sphere of life. "We must not spend our resources unnecessarily, we have to preserve those. If we can run with accurate calculation, we will not face any problem. I believe that," she said.

She strictly said the government will implement those projects which are very much important right now, and those which are not necessary right now will be implemented slowly.

Talking about the recent price hike of essentials, the PM said Covid-19 and Russia-Ukraine war put pressure on the economies of all countries across the globe.

She mentioned that there are some countries in Europe where prices of essentials went up from 17 percent to 50 percent.

Scarcity of edible oil is going on in countries like Germany as England put restrictions on buying edible oil more than one litter, inflation rate hit America more than 8 percent and it will reach ten percent, she added.

The whole world is suffering from this, she observed, saying, "The impact of these will be on us also. The prices of imported items have increased. Cost of transportation (vessel rent) went up, production decreased where the war is going on."

She reiterated her call to the people to maintain austerity and cautiousness in using everything. "If they do that they might not face any problem. The prices of essentials have increased due to international causes and this has to be conveyed to the people," she added.

About the criticism against Rooppur Nuclear Power Plant from a section of people, Sheikh Hasina said it is being built through a public private partnership (PPP) initiative with another country and the loan money will be paid by the next 50 years and it is environment friendly and the produced power will be much cheaper.

She went on saying that, "They do not think about the socio-economical outcome of this power plant after going into production. There is a section of people who always criticise all good jobs."

She also said that these sections of people are also talking against the Padma Bridge.

"After constructing this bridge, the economy of the Southern region of the country will gain momentum. They do not consider the socioeconomic up-gradation of the region," she said.

She categorically said that the government didn't take a single Taka loan from anyone for Padma Multipurpose Bridge. "It is being built by using Bangladesh's own finance. Their claims are totally false and unacceptable," she added.

Sheikh Hasina said she always thinks about the underprivileged and deprived section of people and works for them.

She asked them who are misguiding people with false information to talk in a restrained way while talking. "It is better not to try to confuse the common people," she said.

She also said the government will take decisions for the people of the country and for their welfare.

About her homecoming day, Sheikh Hasina, also the President of ruling Awami League, said the government has been able to return people's power to them.

"We've taken steps in a planned way for the socio-economic welfare of the society while came to the power through winning the 2008 election. People are getting positive results now. My prime aim was to change the fate of the people and I'm still working on that," she said.

The Awami League chief said that there were repeated attempts to kill her "but I did not fear anything."

She also regretted that she did not get any support from newspapers. "I always get support from the people of the country and party leaders and activists. People's trust and confidence is my strength."

Sheikh Hasina said that Father of the Nation Bangabandhu Sheikh Mujibur Rahman wanted to make the country a developed and prosperous one.

"We've got recognition as a developing country. We have to establish that and move further. We can move further defying all odds and hurdles. We have to infuse this spirit into us. Then we will be able to make the country a developed one," she added.

Tuesday is the 42nd homecoming day of Bangladesh Awami League President and Prime Minister Sheikh Hasina. On May 17 in 1981, she returned to the country after a long exile.