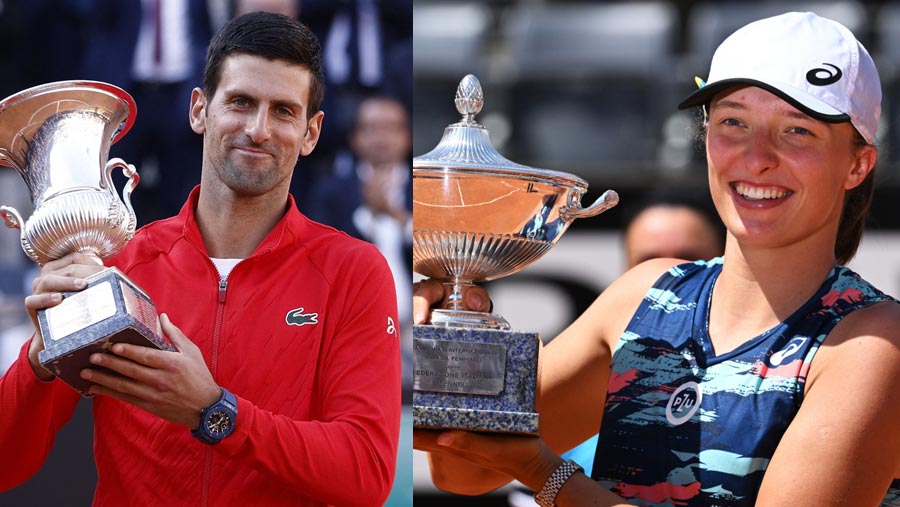 Novak Djokovic won his sixth Italian Open title on Sunday (May 15) after a straight-sets victory over Stefanos Tsitsipas, 6-0, 7-6 (7/5) in Rome, while Iga Swiatek won her fifth straight tournament by dispatching Ons Jabeur.

Novak Djokovic won his sixth Italian Open title on Sunday (May 15) after a straight-sets victory over Stefanos Tsitsipas, 6-0, 7-6 (7/5) in Rome.

The 34-year-old won his first tournament of the season and confirmed his return to form after an opening few months of the season dominated by Covid-19 vaccination controversy.

Sunday's clash was a rematch of the pair's final at last year's French Open final but had little of the drama of that five-set thriller eventually won by the Serb in Paris.

Djokovic had already ensured he will be world number one for a record-extending 370th week and claimed his 1,000th career victory, against Casper Ruud, on Saturday night to reach the final.

And he made surprisingly short work of Greece's Tsitsipas, who had also reached the semi-finals of last week's tournament in Madrid and still leads the men's tour for wins this season.

Iga Swiatek swept to victory at the Italian Open on Sunday, beating Ons Jabeur 6-2, 6-2 to retain the title and claim her fifth tournament crown in a row.

World number one Swiatek dropped to her knees in tears of joy after winning her 28th match in a row, and is red-hot favourite for Roland Garros which starts later this month.

"I'm going to celebrate with a lot of tiramisu!" Swiatek joked on court before adding "see you at the French Open".

The 20-year-old Pole has dropped just one set in her last 20 matches and made light work of Jabeur, ranked seven in the world, in a largely one-sided final in Rome.

Jabeur had come into her first Rome final on a roasting Foro Italico centre court on the back of two thrilling comeback wins over Daria Kasatkina and Maria Sakkari.

Tunisia's Jabeur had made history last week after becoming the first Arab or African woman to win a WTA 1000 title but could not extend a career-best 11-match winning streak against her relentless opponent.

"We've had a great run on clay... we will learn from this match and we will continue forward," said Jabeur.

Swiatek came out all guns blazing and after winning the first three games came close to taking the fourth, failing to capitalise on two break points before Jabeur eventually got a score on the board.

After her heroics in the quarter- and semi-finals fans on the court were hoping for another fightback but by the time she started to show signs of life she was already too far behind.

Down in the second set Jabeur shanked a poor shot wide at break point in game two, and Swiatek then claimed the next two to move into an unassailable lead.

Jabeur then fired up the crowd by winning the next two and another unlikely comeback bid looked to be on when she had three break points in game seven.

However Swiatek took the game to deuce and saved another break point in a superb rally before taking the game, breaking Jabeur's resolve and then moving on to take the title.