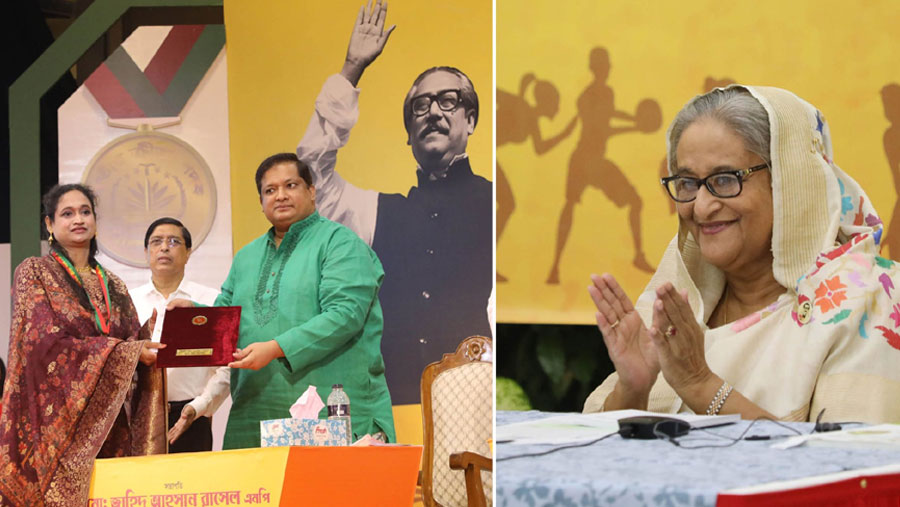 Prime Minister Sheikh Hasina on Wednesday (May 11) distributed the "National Sports Award" to 85 sports persons and organisers  in recognition to their glorious contribution to the country's sports arena. The PM joined the award distribution ceremony, which was held  at Osmani Memorial Auditorium, as the chief guest from her official Ganabhaban residence in Dhaka, local media reported.

The premier asked the authorities concerned to provide the award every year for encouraging players as well as organisers and for the overall progress of the sports.

On behalf of the PM, State Minister for Youth and Sports Md Zahid Ahsan Russel, MP, handed over the awards among the recipients and addressed the occasion as its chair.

Chairman of the ministry's parliamentary standing committee Abdulla Al Islam Jacob was present while its Secretary Mesbah Uddin gave the address of welcome.

A video documentary on development of the sports was also screened at the function.

Earlier, the Ministry of Youth and Sports has nominated 85 sports persons and organisers for this  prestigious National Sports Award in recognitaion of thier contribution to the country's sports during 2013 to 2020.

Each of the awardee will receive an 18-carat of gold medal weighing 25 grams, a cheque of Tk one lakh and a certificate.

Father of the Nation Bangabandhu Sheikh Mujibur Rahman's second son Shaheed Lt. Sheikh Jamal was given the award (posthumous) as player and organiser for the year 2020. Sheikh Salahuddin Jewel, MP received the award  on behalf of Sheikh Jamal, who was a pioneer in the country's sports arena.