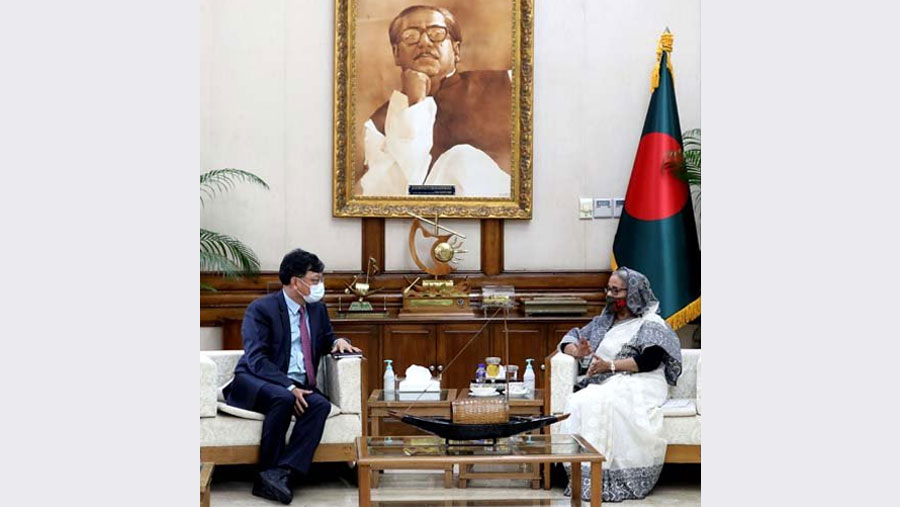 Prime Minister Sheikh Hasina on Monday (May 9) sought support from the Asian Development Bank (ADB) to implement the Delta Plan-2100, saying, "It is very important for Bangladesh."

The premier made the request when Vice President of ADB (Operations-1) Shixin Chen paid a courtesy call on her at her official Ganabhaban residence in the morning. PM's Press Secretary Ihsanul Karim told a media briefing after the meeting.

The PM also sought ADB support to foster regional cooperation particularly in the areas of connectivity, trade and energy cooperation during the meeting.

The ADB vice president assured of being with Bangladesh in its development efforts.

The ADB vice president commanded the dynamic leadership of Sheikh Hasina to keep rolling the wheels of Bangladesh's economy amid the Covid-19 pandemic.

"Bangladesh has been able to keep running the country's economy amid the Covid-19 pandemic due to the visionary leadership of Prime Minister Sheikh Hasina," he said.

He also said his organisation expected that Bangladesh may achieve 7 percent growth in the GDP.

Shixin Chen has praised the overall development of Bangladesh, saying, "Bangladesh is now going through a transitional period (due to its graduation as a developing nation) which is usually critical. But Bangladesh is doing well."

Sheikh Hasina said the Covid-19 situation is now under control in Bangladesh and the countrymen has celebrated the holy Eid-ul-Fitr freely this time after two years.

The premier highly appreciated the cooperation of the ADB during the pandemic period.

About transition period due to Bangladesh's graduation as a developing nation, she said the government has undertaken various programmes to face the situation.

Spelling out her government's different development programmes, she said that the hundred percent people of the country have been brought under electricity coverage.

Sheikh Hasina said the government is now providing homes with lands to the homeless and landless people of the country aiming to give them an improved and better life.

The PM said her government has taken programmes to produce more food replying to ADB vice president's projection that the world may face food shortage due to the Russia-Ukraine war.

Sheikh Hasina said that the ICT sector of the country is developing.

Regarding the regional connectivity for development, she said Bangladesh has opened the door for improving connectivity. In this connection, she said the routes, those were shut after 1965 war, are being reopened.

The premier sought deployment of Bangladesh senior officials in the top management and administration of ADB to maintain regional balance in recruitment.

The ADB vice president said that Bangladesh has set one of the best examples to tackle the Covid-19 pandemic situation. Bangladesh has achieved huge development in the agriculture sector, he also said.

The economic zones, which are being set up across Bangladesh, will meet the demands of domestic and international markets, he hoped.

He expressed ADB's interest to help Bangladesh in the social protection programmes.