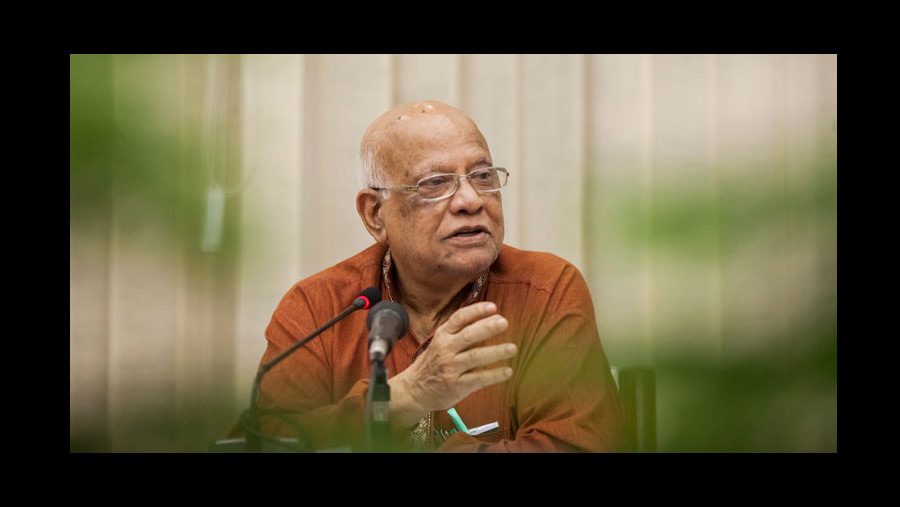 Former finance minister Abul Maal Abdul Muhith died at a hospital here in the early hours of today. He was 88.

Muhith – acclaimed widely as an economist, diplomat, language veteran and freedom fighter – breathed his last at 12:56 a.m. at the United Hospital in the capital, local media reported.

He was also one of the country's longest serving finance ministers and the person who propelled the country's economy to a newer height under the dynamic leadership of Prime Minister Sheikh Hasina.

Afterwards, his body will be taken to Central Shaheed Minar at around 1:00 pm for the public to pay their last respect. Muhith will be buried in Sylhet.

Muhith had been keeping unwell for quite some time. In July 2021, he tested positive for Covid-19, but fought that back.

Then in this March, he was hospitalised again as he became enfeebled in his old age.

Shortly after his death, Finance Minister AHM Mustafa Kamal expressed profound shock and sorrow at the death of the veteran economist and politician.

In a press release, the minister prayed for the peace of his departed soul and conveyed sympathy to the bereaved family members.

Muhith was born on Jan 25 in 1934, to a Bengali Muslim political family in Sylhet. His father, Abu Ahmad Abdul Hafiz, was a judge.

His mother, Syeda Shahar Banu was one of the leading women of the Bengali language movement. He was the third child in a family of fourteen children, and his younger brother is Abul Kalam Abdul Momen, the incumbent Foreign Minister of Bangladesh.

Muhith is the husband of designer Syeda Sabia, and the father of two sons and a daughter. Their daughter, Samina Muhith, is a banker and an expert in the field of monetary policy. Their eldest son, Shahed Muhith, is an architect, and youngest son, Samir Muhith, is a teacher.

Muhith joined civil service in 1956 after a bright academic life.

He held important positions in the public service and was the first diplomat of the Pakistan embassy in Washington who defected to Bangladesh during the War of Liberation in 1971.

He also played a vital role in drawing up global support for Bangladesh. In 2016, he was conferred with Swadhinata Puroskar (Independence Award), the highest civilian award, for his contribution to the Liberation War.

Muhith joined Awami League in 2001. He placed the national budget for a record 12 times.

During his tenure as the finance minister, Bangladesh witnessed a sound macroeconomic management with significant increase in budget size, steady growth and inflation in control.

He was one of the driving forces behind taking up of mega projects in the country.

Muhith was appointed as the secretary of planning in January 1972 and secretary of the External Resources Division of the Finance and Planning Ministry in May 1977.

He was finance and planning minister from March 1982 to December 1983.

Also, Muhith was a pioneer of the Bangladesh Environment Movement and was also the founder and president of BAPA established in 2000.

He was equally gifted as a writer and published 35 books on different subjects including Liberation War, economic development, history, public administration and political problems.

Muhith retired from the government and from his role as Member of Parliament for Sylhet-1 constituency at the Elections of December 2018. His younger brother AK Abdul Momen succeeded him as MP.

Muhith passed the matriculation exam from Sylhet Government Pilot High School in 1949. He secured first place in his Intermediate examination in 1951 from Sylhet MC College. He stood first class first in B.A. (Hons.) in English Literature in 1953 from the University of Dhaka and passed his Masters with credit from the same university in 1955. While in service to the government, he studied at the University of Oxford in 1957-1958. He completed a Master of Public Administration at Harvard University in 1964.

He went for self-retirement in 1981 from his service and then he started his second innings of his career as the specialist of economics and development in Ford Foundation and in the (IFAD). He became Finance and Planning Minister in 1982-83. Next, he worked as the specialist of different institutions of World Bank and the United Nations.

Muhith has been a recognised figure in the World Bank, IMF, IDB and in different organisations of United Nations. He was the Visiting Fellow of Princeton University in 1984 and 1985.