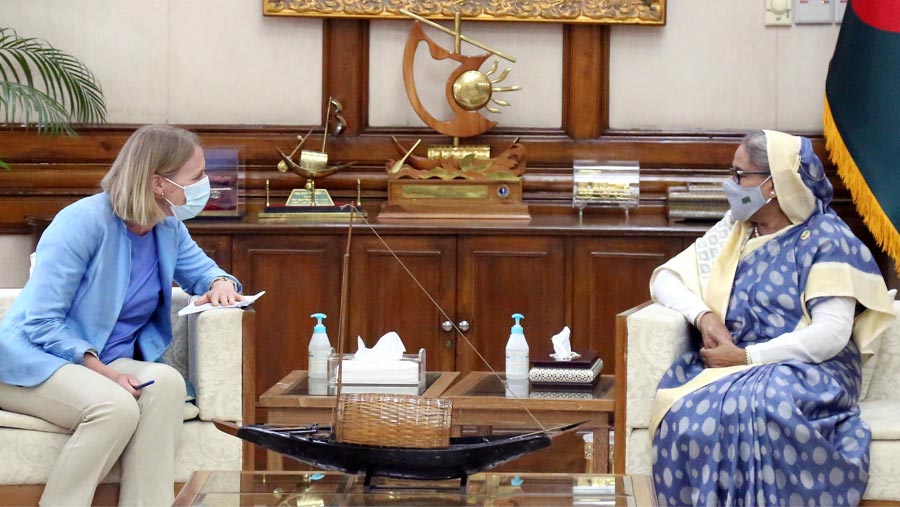 Prime Minister Sheikh Hasina on Monday (Apr 25) said her government has been striving for further flourishing the country's democratic environment.

"The government has been working on strengthening further the country's democratic environment and institutions concerned," she said when visiting Norwegian Foreign Minister Anniken Huitfeldt paid a courtesy call on the Prime Minister at her official Ganabhaban residence in Dhaka.

As the Norwegian minister Huitfeldt talked about the issue of next election, the premier said that the Election Commission which conducts the polls is completely an independent institution.

Mentioning that Bangladesh's democracy suffered setbacks when the military rulers captured power, she said, "They (the military rulers) ascended to power using guns and then descended on politics by forming political parties."

"We know Rohingyas are creating pressure on the economy of Bangladesh," she continued.

The Norwegian minister said that the existing cooperation between Bangladesh and Norway will further be strengthened in future.

About Covid-19 pandemic, Sheikh Hasina said, her government has successfully faced the pandemic alongside keeping roll the wheels of the country's economy.

Recalling the support of Norway during the Liberation War and Father of the Nation Bangabandhu Sheikh Mujibur Rahman's post war nation building efforts, she said, "Since then, Norway remained our closed and valued development, trade and investment partner."

At the outset of the meeting, they exchanged greetings marking the 50 years of diplomatic relations between the two countries.