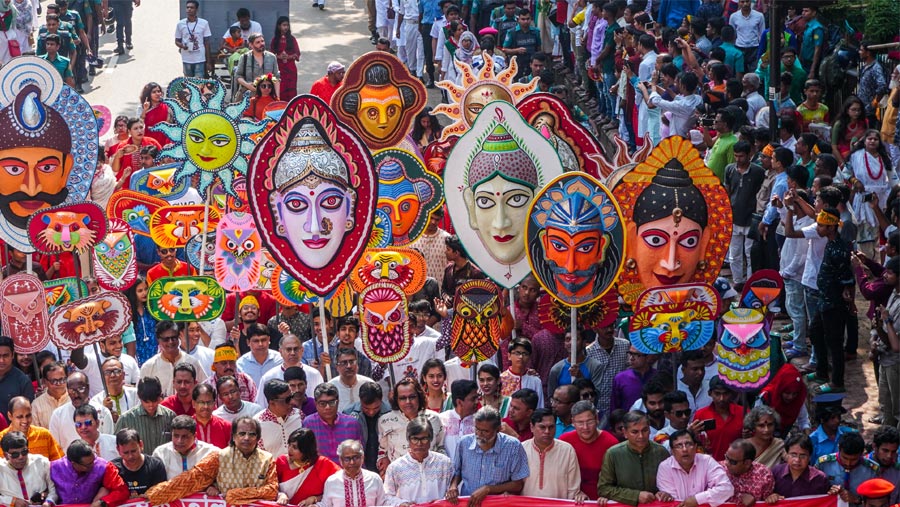 The country is set to celebrate Pohela Boishakh, the first day of Bengali New Year-1429, on Thursday (Apr 14) upholding the rich cultural values and rituals of the Bangalis.

Though the Pahela Boishakh celebration was not held at its traditional venue Ramna Batamul in the last two years amid the coronavirus pandemic, this year the first day of the Bangla calendar will be celebrated following its all rituals at the venue along with bringing out the traditional Mangal Shovajatra (procession).

But, due to the ongoing holy month of Ramadan, it will be celebrated on a limited scale this year.

Dhaka Metropolitan Police Commissioner Shafiqul Islam on Tuesday said all public events marking Pahela Baishakh must be ended by 2 p.m. on Apr 14 due to the holy month of Ramadan.

"Keeping in mind the holy month of Ramadan and traffic jams, all activities for this Bengali New Year and the first Baishakh celebrations will be completed by two o'clock and none will be allowed to enter Ramna Park after one o'clock," he said.

Shafiqul made the remarks after inspecting the security arrangements for the Bengali New Year Baishakh celebrations at Ramna Batamul in Dhaka, local media reported.

Besides, no food stalls will remain open on this day as many Muslim devotees perform fasting during the holy month of Ramadan.

People are expected to join the "Nabo Barsho" festivities across the country, particularly in the capital city.

Pahela Boishakh is one of the most colourful festivals through which the Bangalis bid farewell to the old year and welcome the New Year. On this occasion, people from all walks of life wear traditional Bengali dresses.

Young women will wear white sarees with red borders and adorn themselves with bangles, flowers, and tips, while men wear white pyjamas and Panjabi or Kurta.

The traditional Mangal Shovajatra will be brought out in the country as it has earned the international recognition.

However, business communities, especially in the rural areas, are ready to open their traditional 'Halkhata', new account books. On the day traders also offer sweets to customers.

President Md. Abdul Hamid and Prime Minister Sheikh Hasina are expected to issue separate messages greeting the countrymen on the eve of the day on the occasion of Pahela Boishakh.

The programmes of the day usually begin in the city with the musical soiree of Chhayanat, a leading cultural organisation of the country at Ramna Batamul at dawn.

However, the Chhayanat is asked to wrap up its celebration programmes by 11 a.m. while the authority concerned are advised to end the fair activities on Ramna premises by 2 p.m. so that people could go back to their homes or convenient places to have their Iftar.

But, this year no food stalls will remain open on this day as it is not permitted.

Graffiti will be painted in the walls signifying the arts, culture and heritage of the country.

Improved traditional food will be distributed among jail inmates, patients in hospitals and orphanages on the occasion.

Some historians attribute the Bengali calendar to the 7th century king Shashanka, which was later modified by Mughal emperor Akbar for the purpose of tax collection.

During the Mughal rule, land taxes were collected from Bengali people according to the Islamic Hijri calendar. This calendar was a lunar calendar, and its new year did not coincide with the solar agricultural cycles.

Akbar asked the royal astronomer Fathullah Shirazi to create a new calendar by combining the lunar Islamic calendar and solar Hindu calendar already in use, and this was known as Fasholi Shan (harvest calendar).