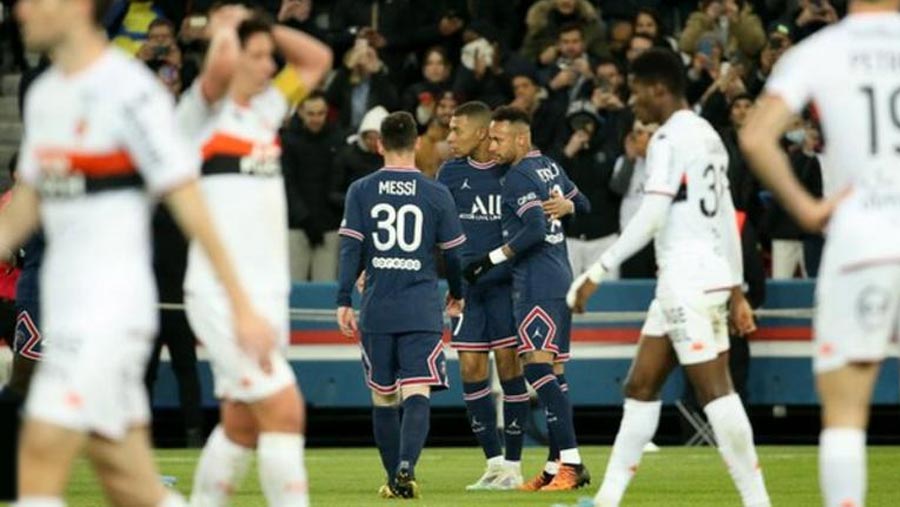 Kylian Mbappe and Neymar both scored hat-tricks as Paris Saint-Germain romped to a 6-1 thrashing of struggling Clermont on Saturday (Apr 9) to move closer to winning Ligue 1. Mbappe, who has still not decided whether he will stay at PSG beyond this season, scored twice and had three assists in last weekend's 5-1 rout of Lorient. He added another assist and won a penalty in this game as he moved to the top of the Ligue 1 goalscoring charts with 20 goals this season. Mauricio Pochettino's men are now 15 points clear of second-placed Rennes and appear certain to regain the title with only seven games remaining. Clermont remain in 17th spot, just one point ahead of Saint-Etienne who occupy the relegation play-off place.

Neymar and Kylian Mbappe both scored hat-tricks against Clermont as Paris Saint-Germain stretched their lead at the top of Ligue 1 to 15 points. The pair gave the visitors a two-goal lead inside 20 minutes, but Jodel Dossou's strike reduced the arrears.

A Neymar penalty and Mbappe's second of the night made it 4-1, before the Frenchman completed his treble with a curling finish. Brazil international Neymar grabbed his third of the night late on.

Lionel Messi was also heavily involved in the win, setting up PSG's first, second and fourth goals at the Stade Gabriel-Montpied.

Third-place Marseille, who visit PSG in 'Le Classique' next weekend, can cut the gap at the top of the table to 12 points with victory at home to Montpellier on Sunday.

Earlier on Saturday, Rennes moved above Marseille into second place as a 3-2 victory at Reims boosted their hopes of qualifying for the Champions League.

Bruno Genesio's men are in front of Marseille, who host Montpellier on Sunday, on goal difference.

The top two qualify automatically for next season's Champions League group stage, with the third-placed side heading into the qualifying rounds.

Rennes have won six of their last seven league games to surge into contention, as Nice have slipped from the top three to fifth place after a poor run of results.

Martin Terrier made it 3-0 before the hour mark.

Rennes held on despite a late Reims rally with goals from Maxime Busi and Jens-Lys Cajuste, who netted a penalty just three minutes after his team-mate Moussa Doumbia had missed one.