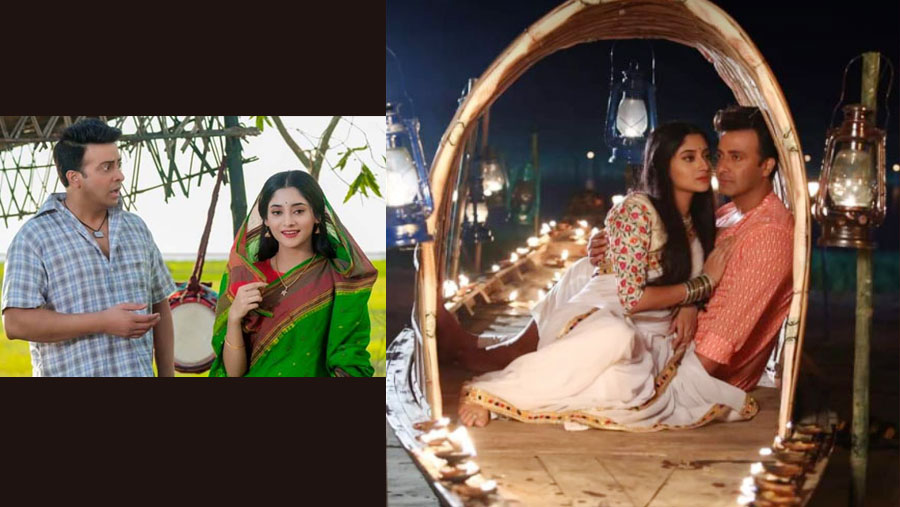 Right after the release on social media Shakib fans were posting in different groups and congratulate the lead characters of the film as well as the director SA Haque Alik.

A love story in a rural context with a traditional touch was seen in the teaser. Regarding this the director of the film Alik said, "We have released the teaser of 'Golui' on the YouTube channel of TOT Films. At the same time, the teaser is being seen on the Facebook pages of Shakib Khan, Puja Cherry and official page of 'Golui'. On coming Saturday April 9, marking the Pahela Boishakh a song titled 'Jombe Mela' sung by Habib Wahid will be released and after 4-5 days, another song will release by Imran and Kana." The official poster of 'Golui' will be released in the meantime, he added.

In the film Shakib Khan will be seen in a new look playing the role of a dhuli (professional drummer) named Lalu for that he has also learned to play the dhol.

The story of the film focus on Lalu who is a son of boatman and thrives to be a dhuli but his father wants him to be a boatman like him. However, from an early age Lalu started learning to play the flute and dhol (drum) from his uncle from. Later, he becomes a dhuli. After a sudden time Lalu acquainted with an affluent girl named Mala, played by Puja Cherry, in his area and soon they fall in love. Thus, the story of the movie will continue.

‘The film 'Golui' received a government grant in the financial year 2020-21. In addition to the grant, a large investment has been made in the film. So we want to release it at the festival and it will come to the theaters on Eid-ul-Fitr,’ said the co-producer of the film Khorshed Alam Khasru.

The shooting of ‘Golui’ took place in Jamthal Sadarghat of Madarganj in Jamalpur. Khourshed Alam Khasru is the co-producer of the government-funded film.