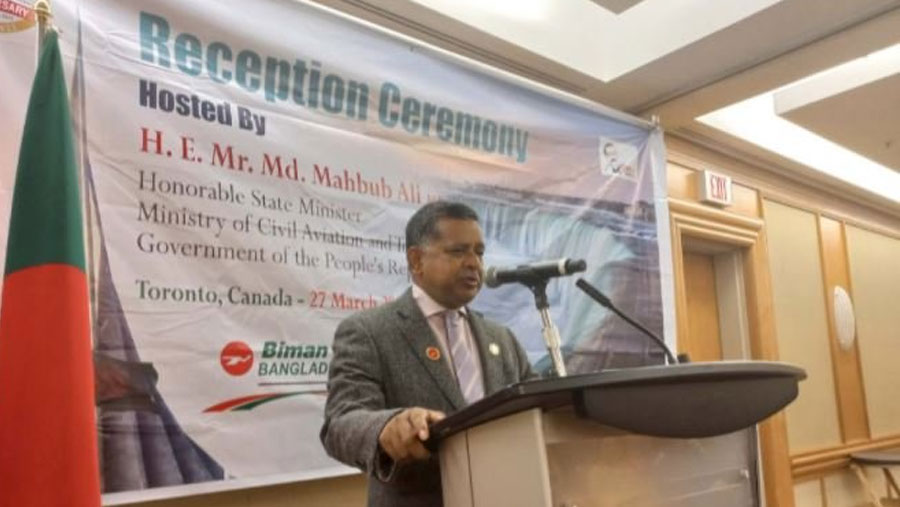 State minister for Civil Aviation and Tourism Md Mahbub Ali said Biman, the national flag-carrier airlines, will introduce new routes soon as per the direction of Prime Minister Sheikh Hasina. He made the remarks at a function jointly organised by Biman Bangladesh Airlines and Bangladesh High Commission on the occasion of launching Dhaka-Toronto flight at Marriot Hotel in Downtown, Canada on Sunday night, said a release in Dhaka on Monday (Mar 28).

The state minister told media that it's a great achievement for Biman while launching many of the world's renowned airlines do not have direct flight slots in Toronto.

"Initially the flight will take-off three days a week, starting this June. With the help of the expatriates of Canada, we will be able to start daily flights soon," he added.

"Bangabandhu Sheikh Mujibur Rahman dreamt that Biman will represent Bangladesh all over the world with pride one day. His worthy successor Prime Minister Sheikh Hasina has directed us to introduce new routes to fulfill Bangabandhu's ever cherished wish," Mahbub Ali said.

"Our work regarding opening Dhaka-New York flight has come a long way. There will be flights for Narita, Male, Sydney, Chennai and Colombo soon," he added.

While replying to the queries, he said, "Passengers' will be able to avail quality service from the third terminal of Hazrat Shahjalal Airport, which will be opened by September this year... Cox's Bazar Airport is also being upgraded to international standards to promote tourism in the international market."

Chairman of the Parliamentary Standing Committee on the Ministry of Civil Aviation and Tourism R A M Obaidul Muktadir Chowdhury, Bangladesh High Commissioner to Canada Khalilur Rahman, Provincial MPP of Canada Dolly Begum, President of BGMEA Faruk Hasan and Managing Director and CEO of Biman Bangladesh Airlines Dr Abu Saleh Mostafa Kamal were present, among others, at the function.