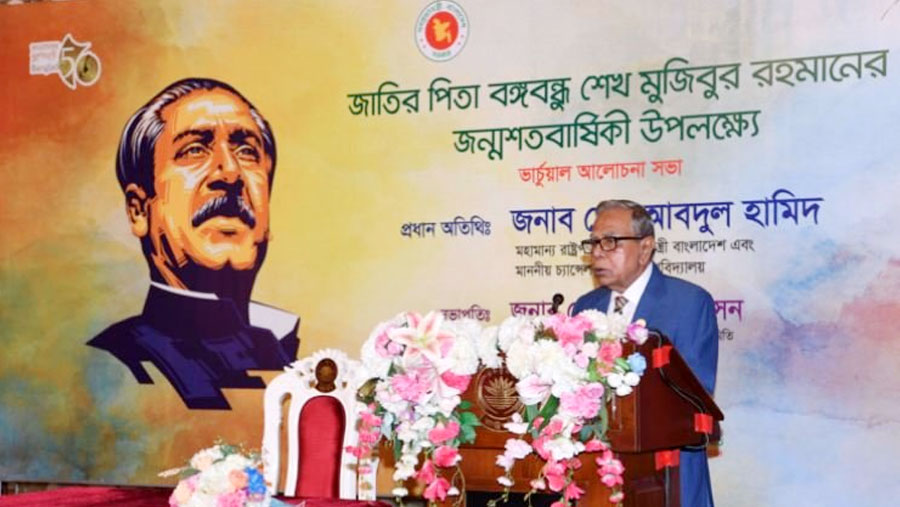 “Ensure that education is not only certificate-based one in anyway and not memorizing notes... We want education to build creative people, free from all sorts of superstition and open-minded personality," the President said while addressing a discussion of Association of Private Universities of Bangladesh virtually from Bangabhaban, local media reported.

Referring to the nature of higher education and research in universities, he said, "Today's world is challenging as it is promising, so students need to acquire an update knowledge and international standard curriculum."

The President said country's young generation, in order to meet the upcoming challenges and the global competition, must be well-educated and skilled in modern education.

Abdul Hamid, also the chancellor of universities, called upon the concerned authorities to seriously consider reserving a certain number of seats in the private universities for the poor and meritorious students and, if possible, providing them with the opportunity to study without pay.

On the occasion of the birth centenary of the Father of the Nation Bangabandhu Sheikh Mujibur Rahman coincided with Bangladesh Independence's Golden Jubilee, the Private University Association organized the discussion.

Thanking the private university authorities for coming forward to invest in the education sector, the President directed the universities not to use this investment as only a tool for making profit.

In his written speech, the President also mentioned some negative news reported about some public and private universities in various electronic and printed media.

"Some private universities are using their investment as their tools of earning money by enrolling additional students beyond the accommodations and also distributing certificates year after year without ensuring regulations, necessary infrastructure and educational facilities," he observed.

But it is important to remember that universities are a place to practice freethinking and earning knowledge, he added.

Discussing on the Father of the Nation, President Hamid said "We have to take lesson from the Bangabandhu's life and his political ideals and philosophy, humanity, thought-consciousness and ethics as a source of inspiration in our education system at all levels."

On the occasion, prizes were distributed among the winners of the essay competition titled 'Bangabandhu Sheikh Mujibur Rahman seen in my eyes'.