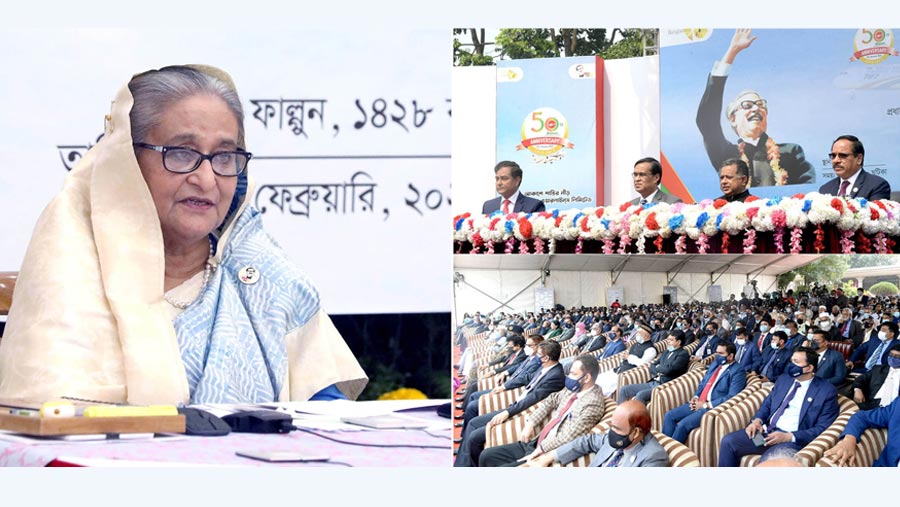 "Biman should put concentration on learning and adopting new technologies to cut dependency on others as it will help save foreign currency," she said.

The premier said this while addressing the opening ceremony of the Golden Jubilee celebration of the state-owned Biman Bangladesh Airlines at Balaka Bhaban in Hazrat Shahjalal International Airport as the chief guest. She joined the function virtually from her official residence Ganabhaban in Dhaka, local media reported.

Referring to the first ever successful completion of landing gears replacement of modern Boeing 777-300 ER and C-check of Boeing 787 with own management and human resources, she said the process has saved huge foreign currency of Biman alongside reducing dependency on others.

The PM said Biman's ground handling management was not up to the mark in the past, but the government is working to establish a separate unit to develop it as a more standard section.

In this connection, Sheikh Hasina told the airline that the training and manpower is needed to make the ground handing management system efficient.

"You (Biman authority) have to focus on ground handling so that it can be done with honesty and efficiency," she said.

She added that the unit (ground handling) is needed to be formed as soon as possible so necessary skilled manpower is recruited for an improved passengers' service.

At the outset of the function, a video documentary on the operation of Biman Bangladesh Airlines was screened.

The PM said the Biman can provide different flight entertainment services along with WiFi due to incorporation of 4th generation aircraft to its fleet.

Mentioning that people don't want to sit idle in this modern era rather they want to do their business work, the premier said, "The modern aircraft of Biman is giving these opportunities to its passengers".

She said expatriate Bangalees always prefer to travel by Biman and keeping it in mind, the management should take measures to improve service quality.

Revealing that Biman is going to digitalise its passenger service system (PSS) fully in the first week of next March, she said ticketing, reservation, check-in and other services will be done online through the PSS.

She hoped that it would be very enjoyable for the country's expatriates.

She added, "It has brightened Bangladesh's image abroad and also demonstrated our skillfulness."

She also mentioned that her government has given Biman Tk 1,000 crore as stimulus package during Covid-19 alongside other organisations to run their activities effectively.

Referring to the ongoing construction work of third terminal of Hazrat Shahjalal International Airport (HSIA), the premier said after the completion of the works, it would boost Biman's operational capability.

The government is also installing latest and state-of-art technology radar in HSIA which will be helpful and profitable for Biman and other international airlines as well, she added.

The PM said they are upgrading the Cox's Bazar Airport into international one as this airport is located in the international route.

She added that the Cox's Bazar Airport has huge opportunities to maintain international communication due to its important location.

Stressing the necessity of strengthening connectivity among the South Asian Countries, she said country's private airline has started to operate flight to Maldives as Biman should expand wing more in this region.

She said the government is developing Syedpur Airport further so neighbouring countries Nepal, Bhutan and India can use it alongside Chattogram and Sylhet Airports.

She went on saying, "More investment comes in the country as the communication system becomes more developed," adding that the government is developing 100 special economic zones across the country.

Stating that cargo transportation is very essential, the head of the government said the cargo flight has already started from Sylhet.

"I want that Biman should have own cargo aircraft and at least two cargo aircrafts are needed to be bought as cargo transportation might be profitable for Biman," she said.

Regarding the custom services, the premier said the services have to be made fully digital so people don't face any hassle in the airport as whenever they go abroad they want to buy and bring something to the country.

She also asked the concerned authorities to be more careful in providing service to the expatriates as over one crore people live abroad and they come home during vacation.

The PM reiterated her call to the countrymen to maintain health safety protocols to escape Covid-19.

Sheikh Hasina also recalled the contribution of Father of the Nation Bangabandhu Sheikh Mujibur Rahman who established Biman Bangladesh Airlines alongside other organisations during his short three years and six months tenure.