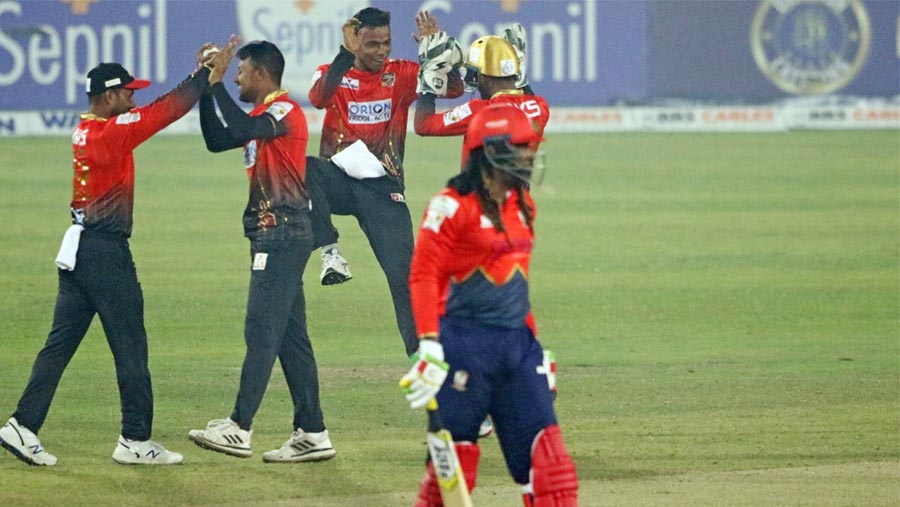 Comilla Victorians secured their second straight victory in the Bangladesh Premier League (BPL) with an emphatic 63-run win over Fortune Barishal on Tuesday at the Sher-e-Bangla National Cricket Stadium.

Pacer Nahidul Islam, who had exceptional figures of 4-1-5-3 was the architect of the victory. But there was handy contribution of Mahmudul Hasan Joy also. The youngster blasted a 35 ball-48 on his BPL debut to help Comilla Victorians post a respectable 158-7 on difficult pitch.

Nahidul then did the rest, wrapping up Barishal’s innings for just 95 in 17.3 overs. His figure is the joint best in terms of conceding runs in full four overs quota along with Shahid Afridi in BPL history.

Nahidul dented Barishal’s chase, dismissing Shykat Ali for duck in the first over and claiming the wicket of captain Shakib Al Hasan for 1 in the second over. That left Barishal in precarious 7-2 in the third over, from which they could never recover.

If not it was enough, Nahidul then took the wicket of Chris Gayle for 7. Barishal’s second defeat in third match was confirmed after the dismissal of Gayle.

Opener Shanto batted with utmost confidence amid the tumbling of wickets around him, before he was the last batter out. In between Towhid Hridoy made 19 and Nurul Hasan Sohan scored 17, only to reduce the margin of the defeat.

Afghanistan recruit Janat earlier complemented Joy’s 48 with a 16 ball-29 not out, to give the side a proper finish.

Joy’s start was undermined by the poor batting of the middle order batters, which raised a prospect of a below par total. But Janat’s fluent batting towards the end made sure that Comilla would finish on high. Janat hit one four and three sixes in his knock.

Earlier when Cameron Delport was dismissed after 13 ball-19 and Faf Du Plessis got out on 6, Joy played the anchor role to drive the side. He hit six fours and one six in his 48 off 35. Mominul Haque was the other notable scorer with 17 while Imrul Kayed made 15.

Dwayne Bravo was the most successful bowler of Barishal with 3-30 while Shakib Al Hasan took 2-25. The captain celebrated both of the wickets in ‘Pushpa’ style – the South Indian movie, acted by Allu Arjun now gripped the whole BPL as several bowlers made ‘Pushpa’ celebration after getting wickets.