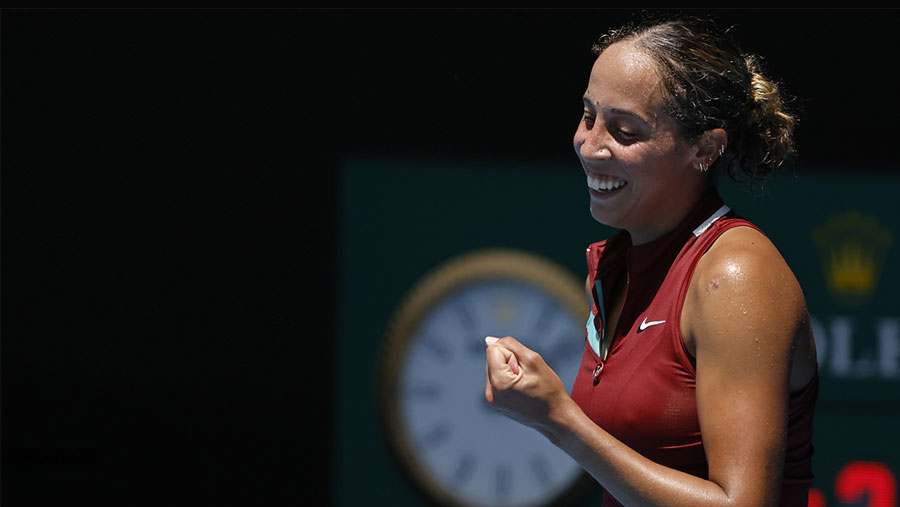 Madison Keys reached her first Grand Slam semi-final for four years with an impressive victory over Barbora Krejcikova at the Australian Open.

American Keys continued her strong start to the season with a 6-3 6-2 win over French Open champion Krejcikova.

Fourth seed Krejcikova struggled with the Melbourne heat and received treatment during the first set.

Keys will face either world number one Ashleigh Barty or compatriot Jessica Pegula next.

The 26-year-old is now on a 10-match unbeaten streak to start the year, having won just 11 matches across the whole of the 2021 season.

The former US Open finalist hit 27 winners as she powered past Krejcikova in one hour 27 minutes.

"I'm really proud of myself and so thankful to my team and my friends and my family for helping me through what was a really tough year."

Both players used ice towels to cool down as temperatures reached 33C at Melbourne Park.

The off-colour Krejcikova, who is still competing in the women's doubles, called for the trainer and the doctor after going 5-2 down in the opening set.

The Czech had her blood pressure and temperature taken and was given tablets before Keys served out the set with back-to-back aces.

Having reeled off six games in a row, Keys suffered a rare bad service game, also double-faulting to put her opponent on the board.

However, Keys kept her composure better in what became a scrappy encounter, with two crunching service winners putting her into a 5-2 lead.

The American let out a shriek of joy as a long return from Krejcikova put her into her first Australian Open semi-final since 2015.

Krejcikova's defeat also means that Australia's Barty will retain the world number one ranking after the Australian Open.