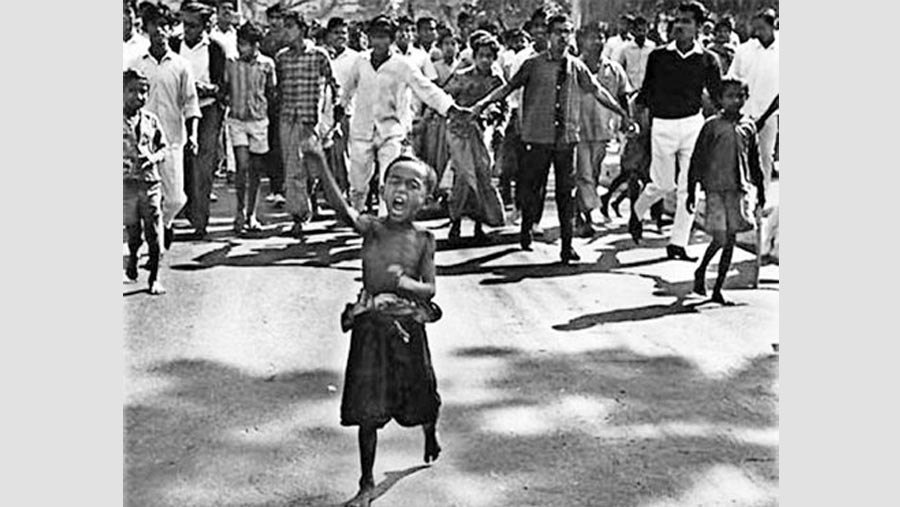 The historic Mass Upsurge Day, commemorating the 1969’s movement for autonomy from the then East Pakistan that eventually led to the Liberation War and the emergence of Bangladesh in 1971, will be observed on Monday (Jan 24) in a befitting manner.

On Jan 24, 1969 Matiur Rahman Mallik, a standard IX student of the Nabakumar Institution, and Rustam Ali, a rickshaw-puller, were killed in a police firing on demonstrators in Dhaka as  Pakistani rulers desperately tried to suppress the popular uprising.

The killings spread intense protests across the country that eventually saw the fall of the autocrat Ayub regime. It is said that the day teaches Bangladeshis the values of democracy and protest against oppression.

On the eve of the day, President Md. Abdul Hamid and Prime Minister Sheikh Hasina issued separate messages, expressing profound respect for those who had embraced martyrdom in the historic movement in 1969, local media reported.

“The January 24 of 1969 is a historic day in the progress of independence and democracy of Bangladesh,” President Abdul Hamid said in his message.

Paying profound homage to the memory of those who were martyred in the independence freedom, he said the day has been remembered in the history of the country's struggle of independence and freedom movement as the day of mass uprising.

The six-point was the charter of Bengalees’ freedom, including autonomy, he added.

He said after the six-point declaration, the speed of the freedom movement intensified and it spread all over East Bengal.

The joint movement of Awami League as well as various political parties and student organisations accelerated the mass movement, the President said, adding that the then dictator filed the Agartala conspiracy case to foil the movement.

He said breaking curfew, politicians-students-teachers-mass people brought out a procession on Jan 24 in 1969 and demanded the release of Bangabandhu and other accused, and overthrow the military rule.

Class-IX student Matiur Rahman was killed in the procession by police firing, he said, adding the blood of Matiur and other martyrs did not go in vain.

The withdrawal of Agartala conspiracy case, the release of political prisoners and President Ayub Khan’s power handover due to the mass uprising was a milestone in the Bangalees’ liberation movement, Abdul Hamid said.

Abdul Hamid urged all to work together for building a prosperous Bangladesh being imbued with the spirit of the 1969 mass uprising.

In her message, Prime Minister Sheikh Hasina called upon all, irrespective of party affiliations, to work together for building a modern, developed and prosperous nation dreamt by Father of the Nation Bangabandhu Sheikh Mujibur Rahman.

She said the 1969 mass upsurge is a significant chapter in the history of the country’s independence.

The nation achieved independence following the 1952 Language Movement, Six-Point Demand, 11-Point Demand, the Mass Upsurge of 1969 and the armed War of Liberation, the premier said. “We got an independent-sovereign Bangladesh,” she added.

She said the greatest Bangalee of all time, Father of the Nation Bangabandhu Sheikh Mujibur Rahman, declared the six-point demand in 1966 to liberate the nation from the exploitation of the Pakistani rulers.

To foil the mass movement of Bangalees, the Pakistani ruling clique had filed the Agartala conspiracy case in 1968 and arrested 35 leaders, including Bangabandhu.

Recalling all the Bangalees’ movements en route to their independence, Sheikh Hasina said on Jan 20 in 1969, police opened fire on a procession of students on the street in front of Dhaka Medical College where Asaduzzaman was killed and many others were injured. To make Bangabandhu Sheikh Mujib free and oust the Pakistani military rule, the struggling mass people brought out a procession on Jan 24 in 1969, avoiding the ruling party's repression and violating evening law, she said.

Matiur Rahman Mallik and Makbul of Nabakumar Institute, Anwar, Rustam, Milon, Alamgir and many others were killed in police firing, Sheikh Hasina said.

In the emergence of mass upsurge, the government of dictator Ayub was forced to release Bangabandhu Sheikh Mujib and other accused in the so-called Agartala conspiracy case, she said.

“As a result of this, Ayub Khan's government fell. The mass uprising of 1969 against mal-governance and exploitation still inspires us today. The martyrs, who sacrificed their lives in the mass 1969 mass upsurge will be remembered among the people who love democracy,” the premier said.

She prayed for eternal peace for the departed souls of all the martyrs who sacrificed their lives in the liberation struggle of the country.