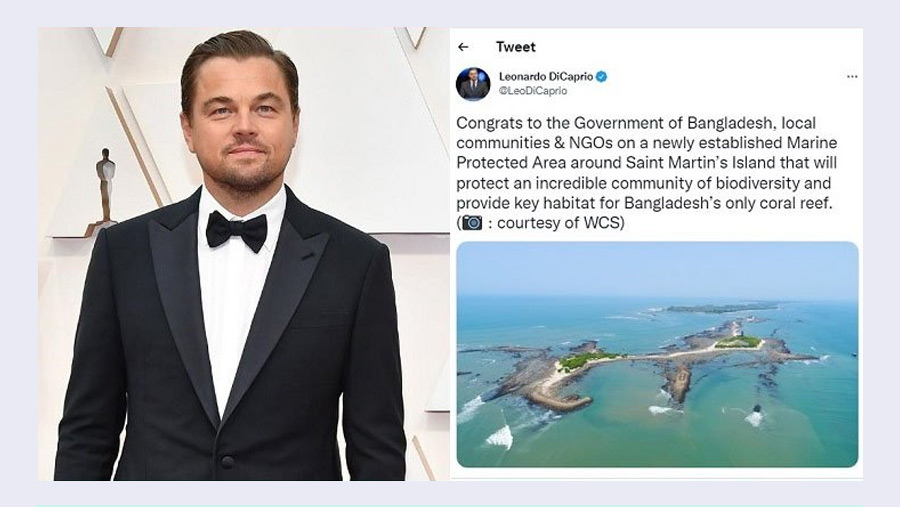 Celebrated Hollywood actor Leonardo DiCaprio has congratulated the government of Bangladesh for establishing a Marine Protected Area around Saint Martin’s Island, a small island in the northeastern part of the Bay of Bengal.

In a tweet on Friday (Jan 21) DiCaprio, a candid global climate campaigner, also praised the local communities and NGOs on the issue, saying that it will protect biodiversity of the Bangladesh’s only coral reef.

“Congrats to the Government of Bangladesh, local communities & NGOs on a newly established Marine Protected Area around Saint Martin's Island that will protect an incredible community of biodiversity and provide key habitat for Bangladesh's only coral reef,” DiCaprio wrote in his tweet.

St. Martin’s Island, also locally known as ‘Naarikel Zinzira’, is a small island of only three square kilometers in the northeastern part of the Bay of Bengal and about 9 km south of the tip of the Cox’s Bazar-Teknaf peninsula.

Also a most admired tourist spot, St Martin's Island is a safe haven to various species of fauna.

The presence of 153 species of sea weeds, 66 species of coral, 187 species of oysters, 240 species of fish, 120 species of birds, 29 species of reptiles and 29 species of mammals were found in the St Martin’s Island, according to a research report of the Department of Environment (DoE) and the UNDP.