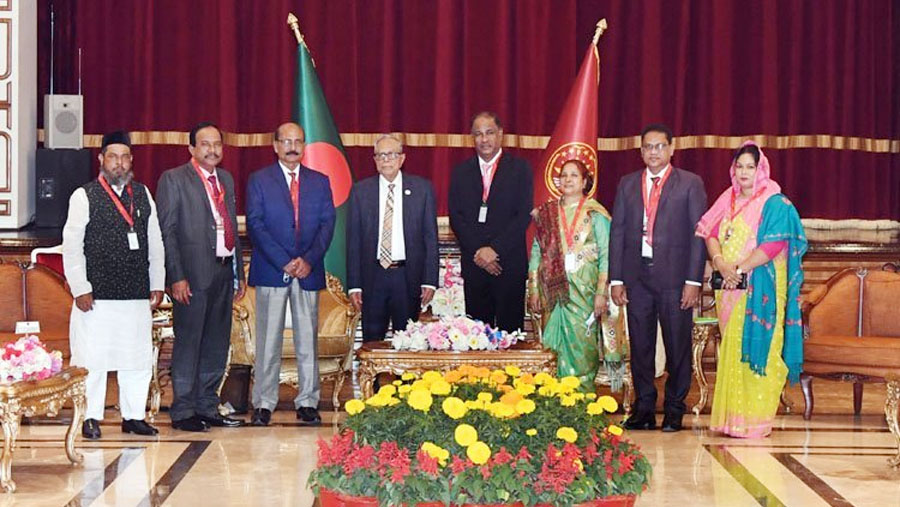 The National People's Party (NPP), during talks with President Md. Abdul Hamid, on Wednesday (Jan 12) placed five proposals with forming an polls-time government led by the prime minister and constituting an acceptable Election Commission (EC) through the 'Search Committee'.

On the 15th day of the ongoing dialogue with the President at Bangabhaban, a seven-member NPP delegation led by its chairman Alhaj Sheikh Chhalauddin Salu and secretary general freedom fighter Md Abdul Hye Mandal joined the talks in the evening.

After the meeting, President's Press Secretary Md Joynal Abedin told the state news agency that the NPP recommended the formation of a "search committee", comprised of honest and experienced individuals.

They also called for forming an EC with honest, impartial personalities, believes in the spirit of the Liberation War and making the EC independent and neutral manner.

The NNP delegation proposed for the formation of an election-time government with the prime minister as the head and comprised of registered political parties representatives, believing in the Liberation War spirit in line with Article-56 of the Constitution.

Welcoming the NPP delegation at Bangabhaban, the President said discussions and exchange of views with the political parties would help in forming an acceptable Election Commission.

The Head of the State said views-exchange-meeting among the political parties would play a fruitful role in resolving any issue in a democracy.

Abedin said the President invited a total of 32 political parties, including the ruling Bangladesh Awami League, for a dialogue on forming an independent, neutral and credible EC.

Meanwhile, the Bangladesh Nationalist Party (BNP) did not take part in today's dialogue. With the BNP, a total of seven political parties refrained from taking part in the dialogue.

On Jan 13, the President will hold a dialogue with Zaker Party at 7 p.m., Bangladesh Kalyan Party at 7:30 p.m. and Bangladesh Jatiyo Party (BJP) at 8 p.m.

Meanwhile, the ruling Bangladesh Awami League is scheduled to hold a dialogue with the President on Jan 18 at 4 p.m.

Earlier, a dialogue was held with the participation of political parties ahead of the ninth, 10th and 11th parliamentary elections.

The President has been given the power to appoint CECs and more than four Election Commissioners.

In the last few terms, the President formed the EC on the basis of the recommendations of the Search Committee.

The current EC's five-year tenure would expire on Feb 14 next year.

During this period, the President will form a new EC, under which the 12th Jatiyo Sangsad elections to be held.