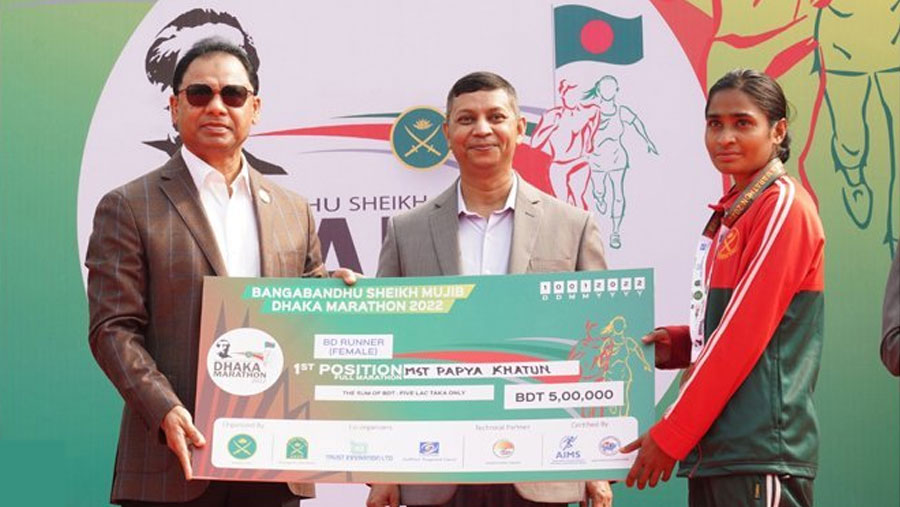 An International Marathon race, titled “Bangabandhu Sheikh Mujib Dhaka Marathon 2022”, supervised by Bangladesh Army, was organized on Monday (Jan 10) in Dhaka for the second time in a row to highlight the significance and importance of the day.

A total of 364 athletes including 37 overseas athletes from 11 countries along with the hosts Bangladesh took part in this competition, local media reported.

The race was held in 10 categories with 41.195 km including full marathon and 21.0975 km including half marathon. The marathon race began from Bangladesh Army Stadium and ended at Hatijheel.

Papia Khatun became the champion in the Full Marathon – Bangladesh women's category, clocking 3 hours 39 minutes and 50 seconds and Asif Biswas topped the list in the men's section after taking 2 hours 35 minutes and 12 seconds.

Vicente Kipsang Rono of Kenya clocked 2 hours 9 minutes 29 seconds to cross the 41.195 kilometer and became champion in International Elite Male Marathon. Morocco's Omar Ait Chitachen is the runner-up in this event after spending more than 20 seconds than Rono.

At the end of the Marathon, Chief of Army Staff General SM Shafiuddin Ahmed distributed prizes among the contestants. Senior military and civilian officials were present at the time.