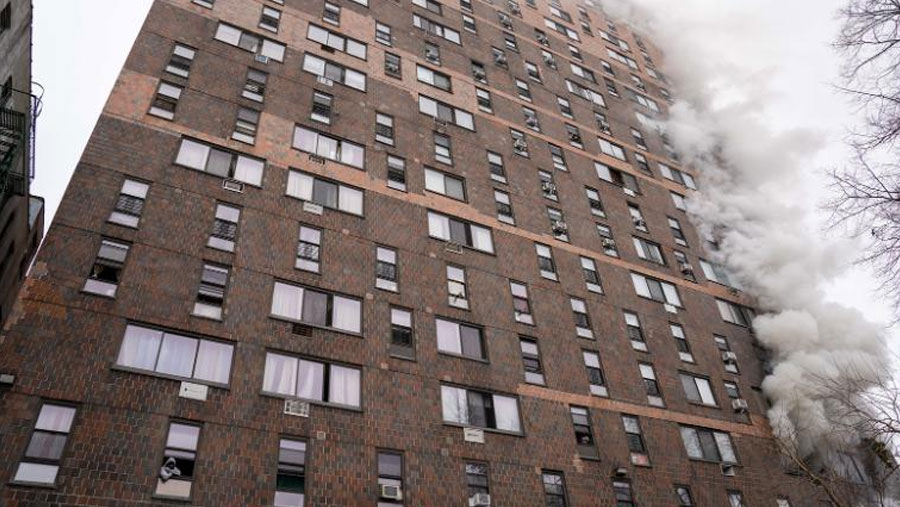 At least 19 people, including nine children, have died after a fire in a New York apartment building. Another 32 people were sent to hospital, several of whom are in a critical condition, according to New York Mayor Eric Adams.

Fire department Commissioner Daniel Nigro said they had found victims on every floor of the 19-storey block, saying the smoke was "unprecedented". He told NBC News the death toll was the worst seen in New York for 30 years.

It comes days after an apartment fire in Philadelphia killed 12, with eight children among the dead.

Sunday's fire broke out in an apartment that spans the second and third floors of the Bronx apartment block at about 11:00 local time (16:00 GMT), officials said.

Some 200 firefighters were sent to tackle the blaze, which officials believe was sparked by a malfunctioning electric heater.

Commissioner Nigro said there were two floors of fire, but the smoke had spread everywhere. The door to the apartment where the fire started was left open, and smoke then spread to every floor, Commissioner Nigro told reporters.

"Members found victims on every floor in stairwells and were taking them out in cardiac and respiratory arrest," he said.

George King, who lives nearby, told AFP news agency people were waving from the windows as the flames took hold.

"I saw the smoke, a lot of people were panicking," he said. "You could see that no-one wanted to jump from the building."

A total of 63 people suffered injuries, including the 32 taken to hospital. Thirteen are in a critical condition, Stefan Ringel, a senior adviser to the mayor, told AP news agency.