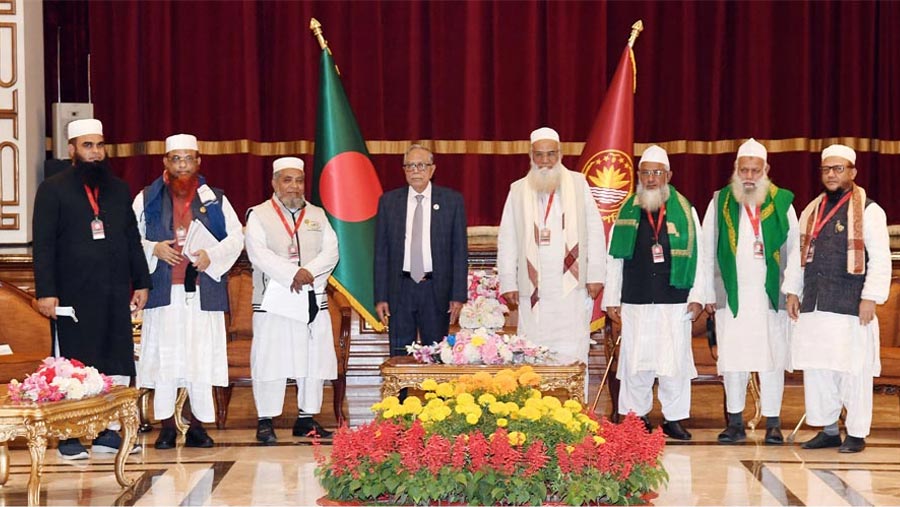 Bangladesh Islami Front (BIF) and Jamiat Ulema-E-Islam Bangladesh (JUIB), during its dialogue with President Md. Abdul Hamid, on Wednesday (Jan 5) separately proposed for enactment of time befitting law and empowering the Election Commission (EC) during the polls-time. These two Islamic parties sought the President to enact a new law, hand over the charges of home, public administration and defense ministries during the election-time government as they believe it would be helpful to hold a free, fair and credible poll.

He said on the 10th day of the ongoing dialogue, a six-member BIF delegation led by its chairman Maulana A A Mannan and secretary general Maulana M A Matin placed the proposals while a seven-member delegation led by Maulana Abdur Rab Yousufi, Vice-President of JUIB, a former partner of BNP-led 20 party alliance, gave some proposals to the President.

Till date, total 15 parties sat for the dialogue with the President till date while three parties – Communist Party of Bangladesh, Bangladesh Samajtantrik Dal and Islami Andolon Bangladesh – refused to join it.

Welcoming the leaders at Bangabhaban, the President said the formation of an acceptable election commission as well as the cooperation of all concerned, including political parties, is a must to ensure a free, fair and credible election.

The head of the state called upon the country's political parties to come forward to motivate the people in this process for the betterment of the country and its people.

The Bangabhaban spokesman said the President has invited 10 more political parties, including Bangladesh Nationalist Party (BNP), for the dialogue over the formation of an independent, neutral and credible EC.

Thursday's talks will be held with the Gano Front at 6 p.m. and the Liberal Democratic Party (LDP) at 7 p.m.

Dialogue with Krishak Sramik Janata League will be held on Jan 9 at 6 p.m. and Bangladesh Muslim League at 7 p.m. on that day.

Talks with the Jatiyo Party (JP) will be held on Jan 10 at 6 p.m. while with Jatiyo Samajtantrik Dal will be held at 7 p.m.

According to the schedule of dialogue, the President will hold talks with the Islami Front Bangladesh at 6 p.m. on Jan 11 (Tuesday) and with the Bangladesh National Awami Party (Bangladesh NAP) at 7 p.m. on the same day.

No date has yet been set for talks with other political parties.

The current EC's five-year tenure will end on Feb 14 next year. During this period, the President will form a new EC, under which the twelfth parliamentary polls will be held.