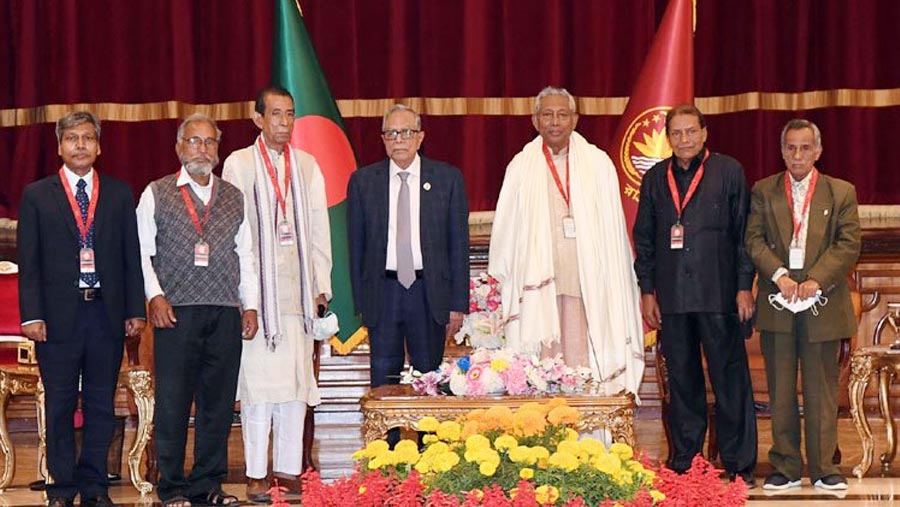 Left-leaning Bangladesh Samyabadi Dal (M-L) in their dialogue with President Md. Abdul Hamid on Tuesday (Jan 4) placed a five-point proposal, including enacting a time-befitting law over formation of an acceptable Election Commission (EC).

During the ongoing dialogue of President with political parties, on the ninth day, the party also proposed formation of an election-time government under the leadership of the Prime Minister in line with the Constitution.

Later in the regular briefing after the dialogue, President's Press Secretary Md Joynal Abedin said a six-member delegation led by Comrade Dilip Barua, general secretary of Bangladesher Samyabadi Dal (M-L), a partner of the Awami League-led 14-party combine, joined the talks at Durbar Hall of Bangabhaban in the evening. They proposed to form a council comprised of constitutional bodies to form a "Search Committee" in the absence of the specific law in this connection.

The left-leaning party thanked the President for initiating talks with the political parties to form the EC.

Welcoming the leaders at Bangabhaban, the President said the well-thoughts of the political parties are very important for formation of an independent, neutral and acceptable Election Commission.

The head of the state said the formation of Election Commission is the constitutional responsibility of the President.

Stressing on holding a free, fair and credible election, President Hamid said it was important to ensure a healthy environment in political arena and "this was a task of the political parties also".

On Wednesday (Jan 5) the dialogue with Jatiyo Party (JP) will be held at 6 p.m. and with Jamiate Ulamaye Islam Bangladesh at 7 p.m.

The talks with the Gano Front is scheduled for Jan 6 at 6 p.m. and the Liberal Democratic Party (LDP) at 7 p.m.

Dialogue with Krishak Sramik Janata League will be held on Jan 9 at 6 p.m. and Bangladesh Muslim League (BML) at 7 p.m. on that day.

Talks with the Jatiyo Party (JP) will be held on Jan 10 at 6 p.m. while with Jatiyo Samajtantrik Dal (JSD) will be held at 7 p.m.

According to the schedule of dialogue, the President will hold talks with the Islami Front Bangladesh at 6 p.m. on Jan 11 and with the Bangladesh National Awami Party (Bangladesh NAP) at 7 p.m. on the same day.

No date has yet been set for talks with other political parties. However, total 13-party sat for the dialogue with the President till date, the press secretary added.

The current EC's five-year tenure will end on Feb 14 next year. During this period, the President will form a new EC, under which the twelfth parliamentary polls will be held.