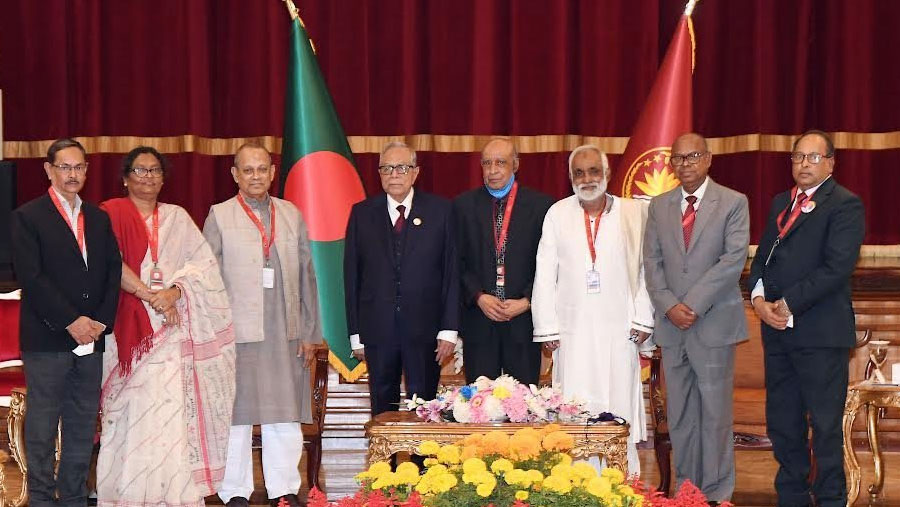 President Md. Abdul Hamid on Monday (Jan 3) urged all political parties to be respectful to each other's opinion with utmost tolerance to flourish democracy as he held talks with Ganatantri Party and Bangladesh Khelafat Andolon in Dhaka.

"It is an imperative to build a culture of consensus in politics" for betterment of the country and its people, the President told politicians.

President Hamid held separate talks with the Ganatantri Party and the Bangladesh Khilafah Andolon on the eighth day of the ongoing dialogue with the political parties aimed at forming an independent, impartial and acceptable Election Commission (EC).

Held the talks at Bangabhaban's Durbar Hall, the President said it is mandatory to reflect the principles and ideals while managing the party to ensure development of healthy politics.

A seven-member delegation led by Ganatantri Party President Barrister Arash Ali and General Secretary Dr Shahadat Hossain took part in the talks with eight-point proposals. The proposals include: enacting a law to form an EC and forming a Constitutional Council. On the other hand, a seven-member delegation led by Bangladesh Khilafah Movement Chairman Maulana Ataullah Hafezi and Secretary General Maulana Habibullah Miaji took part in the dialogue.

The Bangabhaban spokesman said they presented a six-point proposal to the President, including the enactment of a permanent law to form a neutral, capable, strong, efficient and competent Election Commission.

In the dialogue, the leaders of the Ganatantri Party said that they have proposed to form a constitutional council for the appointment of the EC.

A Constitutional Council comprised of the Prime Minister, Leader of the Opposition, Speaker, Chief Justice and Attorney General to be formed, and the council would propose the President the names of the Chief Election Commissioner (CEC) and other commissioners.

They proposed to appoint competent, efficient, honest and respected people in the EC who believe in the spirit of the Liberation War.

In the dialogue, the leaders of the Bangladesh Khilafah Andolon proposed to form an Election Commission comprised of young and old aimed at utilizing the experiences to this end. They also proposed to declare the families involved in corruption, black money holders, illegal property holders, terrorists, convicted criminals and loan defaulters ineligible to participate in the polls.

Welcoming the political leaders at Bangabhaban, the President said the well-thoughts and valuable opinions of the political parties are very important for formation of an acceptable EC.

The head of state said the formation of the EC is a constitutional responsibility and there is justification for taking their (political leaders) advices to form an acceptable EC.

A total of 12 political parties held talks with the President till date.

On Tuesday (Jan 4) the dialogue will be held with the Samyabadi Dal of Bangladesh at 6 p.m. and the Islamic Andolon Bangladesh at 7 p.m.

Dialogue with Jatiyo Party will be held at 6 p.m. and Jamiate Ulamaye Islam Bangladesh at 7 p.m. on Jan 5.

The talks with the Gano Front is scheduled for Jan 6 at 6 p.m. and the Liberal Democratic Party (LDP) at 7 p.m.

Dialogue with Krishak Sramik Janata League will be held on Jan 9 at 6 p.m. and Bangladesh Muslim League (BML) at 7 p.m. on that day.

Talks with the Jatiyo Party will be held on Jan 10 at 6 p.m. while with Jatiyo Samajtantrik Dal (JSD) will be held at 7 p.m.

No date has yet been set for talks with other political parties, the press secretary added.

The current EC's five-year tenure will end on Feb 14. During this period, the President will form a new EC, under which the twelfth parliamentary polls will be held.