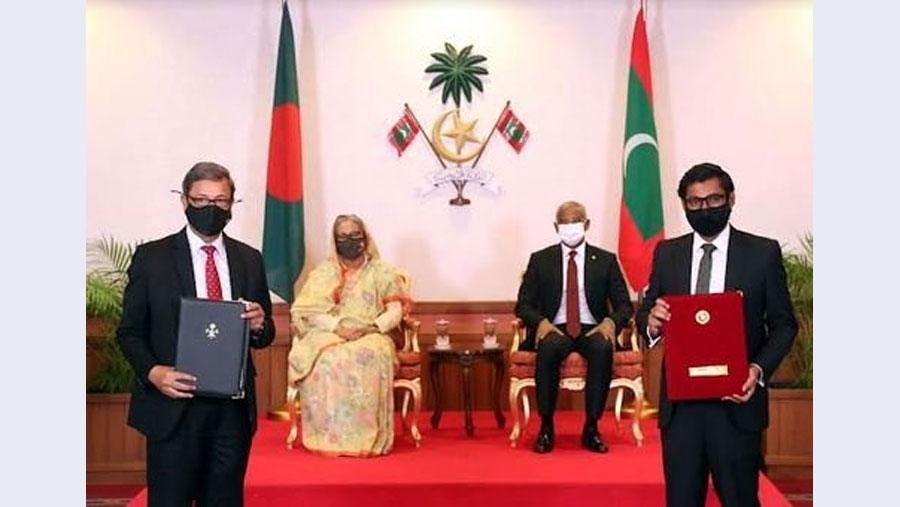 Three instruments were signed and another one was renewed on Thursday (Dec 23) between Bangladesh and Maldives on health, dual taxation, youth and sports, elevating the bilateral relations to new height. The signing ceremony was held at the President's Office in Male in the morning in presence of Bangladesh Prime Minister Sheikh Hasina and Maldivian President Ibrahim Mohamed Solih after the bilateral talks between the two leaders.

Besides, Chairman of the National Board of Revenue of Bangladesh Abu Hena Md. Rahmatul Muneem and Commissioner-General of Taxation of the Maldives Inland Revenue Authority (MIRA) Fathuhulla Jameel also signed the agreement between the Maldives and Bangladesh for the Elimination of Double Taxation with Respect to the Taxes on Income and the Prevention of Tax Evasion and Avoidance.

Apart from this, a Memorandum of Understanding (MoU) on the areas of Healthcare and Medical Sciences was renewed between Bangladesh and Maldives' health ministries.

Bangladesh has also gifted 13 military vehicles to the Maldives as a token of friendship between the two South Asian nations during the ceremony.

On behalf of Bangladesh, its Chief of Army Staff General S M Shafiuddin Ahmed made the symbolic handover of the keys of the military vehicles to Maldives Chief of Defence Force Major General Abdullah Shamaal.

Earlier, on arrival of Prime Minister Sheikh Hasina at the President's Office, she was formally received by Maldivian President Ibrahim Mohamed Solih as a red carpet was rolled out with according a guard of honor and presenting gun salute.

The prime minister also visited the line of presentation of both the countries.

Sheikh Hasina has signed the visitors' book kept at the President's Office and took part in a photo session there.

The premier arrived at Male, the capital of Maldives on her six days maiden bilateral visits by a VVIP special flight of the Biman Bangladesh Airlines on Wednesday (Dec 22) afternoon.

In the briefing, the two leaders said they had fruitful bilateral talks on promoting trade, investment, and connectivity between the two countries.

In her statement in the joint briefing, Sheikh Hasina said, "I had a detailed discussion with President Solih on promoting bilateral trade, investment and connectivity."

The premier said they agreed to strengthen bilateral cooperation, especially in health, education, human resources development, youth and sports, fisheries, and agriculture between the two countries.

She said the two leaders also consented to work together to face the challenge of climate change and for early repatriation of forcibly displaced Rohingyas to Myanmar during the dialogue.

Sheikh Hasina added during the bilateral talks with President Solih she had also re-emphasized the necessity of a Preferential Trade Agreement (PTA) between the two countries and a bilateral investment protection arrangement for mutual facilitation of investment.

She went on saying, "Despite opportunities, we could not yet fully tap the potentials of bilateral trade and investment".

About the outcome of the talks, she said, "I am happy to share that we just held a very fruitful discussion on the entire spectrum of our bilateral relations. We reviewed the progress made so far on our earlier decisions and found the outcome satisfactory."

She said that they also discussed cooperation in multilateral fora including countering terrorism.

In his press statement in the joint briefing, Maldivian President Ibrahim Mohamed Solih said he had fruitful bilateral talks with Prime Minister Sheikh Hasina, adding, "I look forward to enhancing our interactions on trade and investment."

Mentioning that significant progress has been made in the economic, social and political areas, he said, "Bangladesh Prime Minister Sheikh Hasina and I had official talks this time and reviewed the progress made in the bilateral meetings last March."

The Maldivian president said that in addition to the bilateral issues, the Bangladesh premier and he discussed regional and international issues of mutual cooperation.

"To the SAARC and other platforms such as Indian Ocean Rim Association, the Prime Minister and I assured that terrorism, extremism and radicalisation must be addressed to achieve regional security, prosperity, stability and peace," he said.