PM urges Maldives to be partner in Bangladesh’s development journey 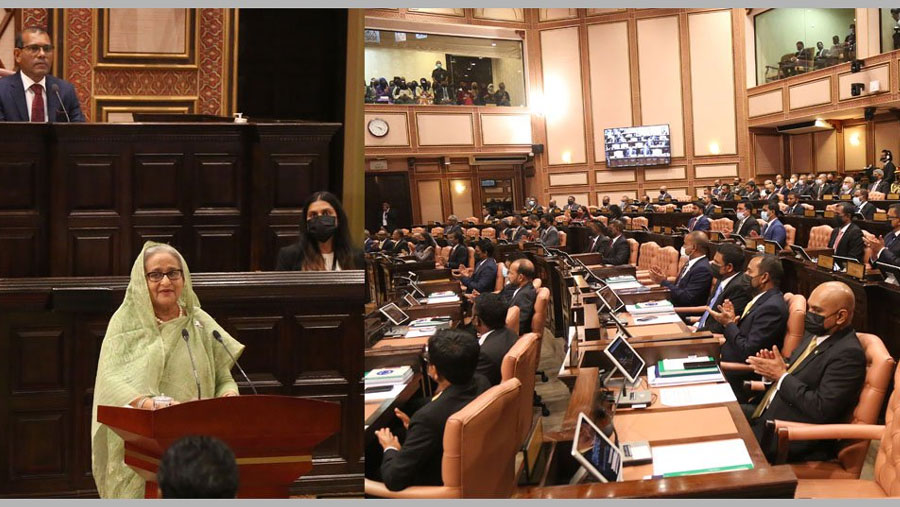 Prime Minister Sheikh Hasina on Thursday (Dec 23) called upon the government and private sector of Maldives to be partner in Bangladesh’s development journey for mutual benefits, as she addressed the Maldivian national parliament in Male.

“I hope that our warm and friendly relations will further be consolidated. Bangladesh is thriving with possibilities and potentials. I call upon both the government and private sector of the Maldives to be our partner in the development journey in the next fifty years for mutual benefit,” she said.

Mentioning that no country in the world can prosper in isolation, the premier said the Covid-19 pandemic has taught all that they are interdependent and have to share their experiences for the sake of a better, secured, and prosperous world.

“We reiterate our principled position of collaboration with our fraternal neighbors in South Asia, as had been enunciated by our Father of the Nation,” she said.

On the Bangladeshi Prime Minister’s arrival at the People’s Majlis, she was received by Speaker Mohamed Nasheed and the Deputy Speaker.

The Maldivian Parliament Speaker in his speech highly praised PM Sheikh Hasina for her role in leading the developing nations particularly to fight the climate change impact on the global stage.

He referred to a BBC report that described Sheikh Hasina as one of the five deal makers to pursue the climate change issues at the 76th United Nation's General Assembly (UNGA).

The Speaker presented the Prime Minister a boat painting.

The PM later signed the visitors' book and held a meeting with the Speaker of the Maldives parliament.

Addressing the parliament, Sheikh Hasina said, “We are particularly encouraged to witness your development journey, your successful transition from LDC to a middle-income country, and we hope Bangladesh and Maldives would tap the complementarities.”

“I am deeply honored to have the opportunity to address the distinguished members of the Majlis, at this home of politics and policies, which is the heart of democracy of this beautiful country,” she told the Maldives parliament.

“As a person who has been involved in politics all her life, I am delighted to be here at the Parliament of a fraternal country with whom we share historical linkages, multiple commonalities, similar challenges, and a shared vision of prosperity,” she added.

The Bangladesh premier said that 2021 was a landmark year for Bangladesh-Maldives bilateral relations with the exchange of high-level visits, fruitful bilateral discussions among relevant authorities, and goodwill exchange of collaboration on many areas of bilateral interests.

“We firmly believe we would further consolidate our bilateral relations through further expansion of trade, investment, connectivity, tourism, and people-to-people contacts,” she added.

The PM said she hopes that the next fifty years’ journey of the two countries will be even more fruitful and bring meaningful changes to the lives of the people.

“I wish prosperity and happiness for the people of the Maldives and its pioneering leaders,” she said.

Taking this opportunity, she said, “I want to pay homage to our Father of the Nation, Bangabandhu Sheikh Mujibur Rahman, who selflessly devoted his whole life for the cause of democracy and establishing a society free from hunger-poverty, deprivation, and injustice.”

The PM thanked President Solih for attending the opening celebrations of the Birth Centenary of the Father of the Nation and the Golden Jubilee of Bangladesh’s independence in March last.

“Our path to independence and emancipation has not been an easy one. Our Father of the Nation struggled all his life to bring happiness to the people of Bengal. He spent about 13 years out of 24 years from 1947 to 1971 in jail with occasional intervals,” she added.

The Father of the Nation took responsibility for his people after returning home on Jan 10, 1972 and started reconstructing and rebuilding the war-ravaged country and rolled on the wheels of its economy and transformed a newborn country from rubles into a Least Developed Country (LDC) status within only three and a half years, she said.

Unfortunately, Father of the Nation was brutally assassinated on Aug 15 in 1975 along with 18 family members, she told the Maldivian parliament.

“My younger sister and I escaped since we were out of the country. I spent six years in exile and, since my return to Bangladesh, suffered imprisonment, multiple assassination attempts, and much hardship,” she said, adding, “However, it is my greatest satisfaction that today Bangladesh has won acclaim for establishing democracy and pluralism.”

Following the independence, Bangabandhu laid down the foundation of the path to the socio-economic freedom of the country, she said.

“Following his footsteps and inspired by this economic and political philosophy, I am happy to share that Bangladesh has achieved remarkable progress in the last decade. The average GDP growth registered in the previous few years has been more than 7 percent while in 2019-20, just before the pandemic, our GDP growth rate was 8.2 percent,” she added.

The PM said, “In continuation of our development journey, we have to transform Bangladesh into a middle-income country by 2021, meet all the SDG targets by 2031, turn into a knowledge-based developed country by 2041, and a prosperous and resilient Delta by 2100.”

The UN General Assembly unanimously adopted the resolution on graduation of Bangladesh from the LDC category on Nov 24, 2021, she said, adding that Bangladesh is now a US$ 411 billion economy and is ranked among the 34 largest economies of the world.

Mentioning that, development brings its own challenges, she said, “To cope with the situation that we will face after the withdrawal of the benefits we used to enjoy as an LDC, our focus will be on diversifying the economy and exploring new markets.”

"We are also striving to transform into a technology-driven society and innovation-led growth with a vision of Digital Bangladesh," she added.