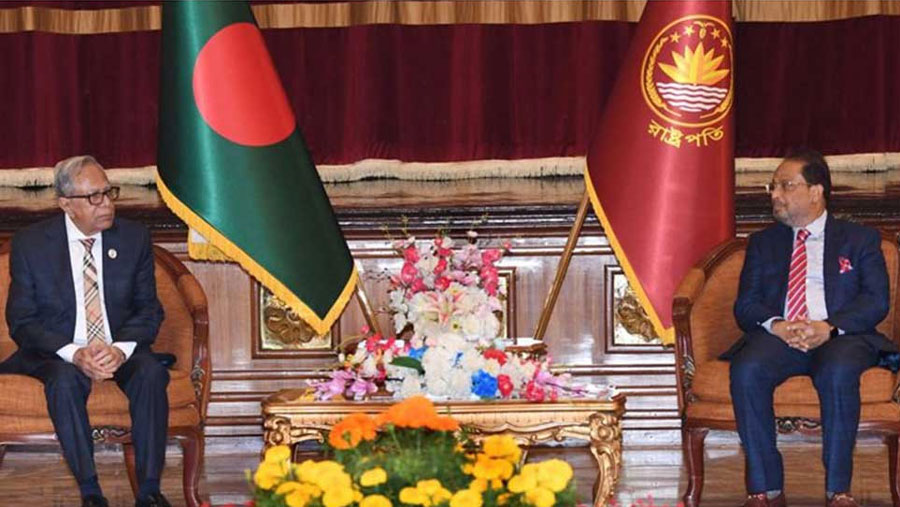 President Md. Abdul Hamid on Monday (Dec 20) sought cooperation of political parties and civil society in forming an "acceptable Election Commission" (EC) as he began consultations, with Jatiyo Party (JaPa) appearing as the first political party to take part in the dialogue.

"Cooperation of all political parties and civil society members is a must to constitute the Election Commission as a very important institution," President's Press Secretary Md Joynal Abedin quoted him as saying during the talks with main opposition party in parliament.

Abedin told state media that JaPa floated some proposals for Presidential consideration as an eight-member delegation led by its Chairman GM Quader MP met him at Bangabhaban in the afternoon as part of the dialogue process.

The Bangabhaban spokesman said President Hamid sought opinions and suggestions of different political parties to form an "independent, neutral, acceptable, strong and effective Election Commission" to conduct national elections as well as the local government ones "in a free, fair and credible manner".

In the dialogue, Jatiyo Party Chairman GM Quader presented their proposals to enact a law in line with Article 116 (1) of the Constitution to form the EC and another law for ensuring full cooperation of the Executive in the EC's overall functioning under the Article 26 of the Constitution."

He said if it is not possible to enact a new law within this period, it can be done by issuing an ordinance for the formation of an independent, neutral and credible Election Commission.

The JaPa chairman said, "If it is not possible to enact new laws or issue ordinances... an Election Commission can be constituted through an acceptable search committee."

GM Quader expressed his party's full support to the President's initiative in this process.

"Bangabhaban is working to complete the dialogue within a very shortest possible time. The President will only sit in talks with the political parties registered with the Election Commission," Abedin said.

He said the President had expressed his desire to hold talks with all political parties registered with the EC gradually.

The dialogue with the ruling Awami League and Bangladesh Nationalist Party (BNP) are yet to set till date, he added.

Earlier, same dialogue was held with the participation of political parties ahead of the ninth, tenth and eleventh parliamentary polls.

The current EC's five-year term will end on Feb 14 next year. During this period, the President will form a new commission, under which the 12th parliamentary elections will be held.