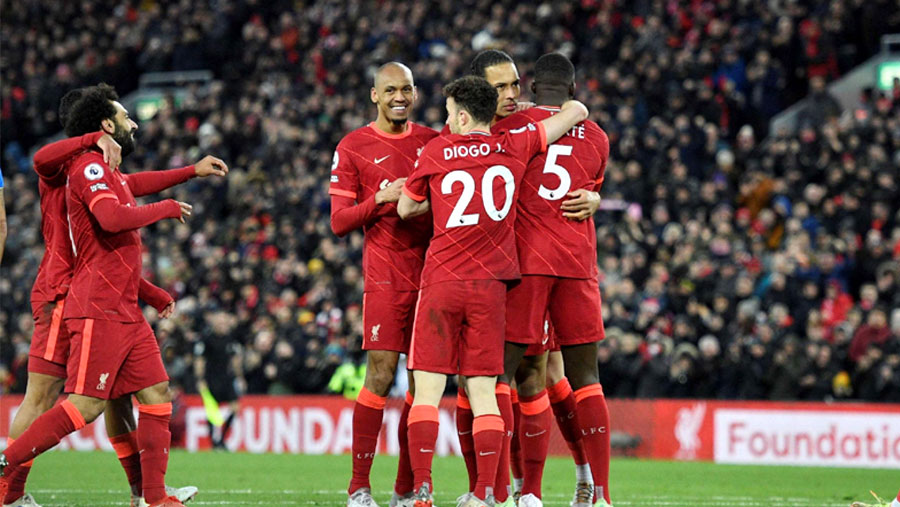 Goals from Diogo Jota (two), Thiago Alcantara, and Virgil van Dijk helped Liverpool put up another strong performance as they defeated Southampton 4-0 and claimed three points in a Premier League contest. The win helped Liverpool (28) move to the second spot in the table behind Chelsea (29) and ahead of Manchester City (26) – both of whom will take the field on Sunday (Nov 28).

Diogo Jota scored twice as Liverpool thrashed Southampton to move up to second in the Premier League, one point behind leaders Chelsea.

Southampton arrived at Anfield clearly determined to attack the hosts but their bold intent was punished after less than two minutes when Andrew Robertson was allowed to get away down the flank and cross for Jota to poke in.

Sensing the opportunity to secure a big win against wide-open opponents, Liverpool kept up the attack, Sadio Mane heading wide before having a goal ruled out for a marginal offside.

But a second goal duly arrived just after the half-hour mark when the unmarked Jota tapped in from Mohamed Salah's square ball after good link-up play between the Egypt international and Jordan Henderson.

Those two strikes took Liverpool to 700 goals scored since Jurgen Klopp arrived at Anfield – they have also become the first top-flight team in English football to score at least twice in 17 straight matches in all competitions since Sunderland in 1927.

The Reds were not done there, however, and a third goal arrived just a few minutes later when the visitors failed to clear their lines properly and Thiago Alcantara punished them with a deflected strike for his second goal in as many games.

The half-time interval provided only a brief respite and Liverpool made it 4-0 soon after the restart as Virgil van Dijk fired in from a corner.

Jota almost completed his hat-trick midway through the second half but stabbed just wide as Southampton kept the damage to four goals when in truth it could have been much worse.