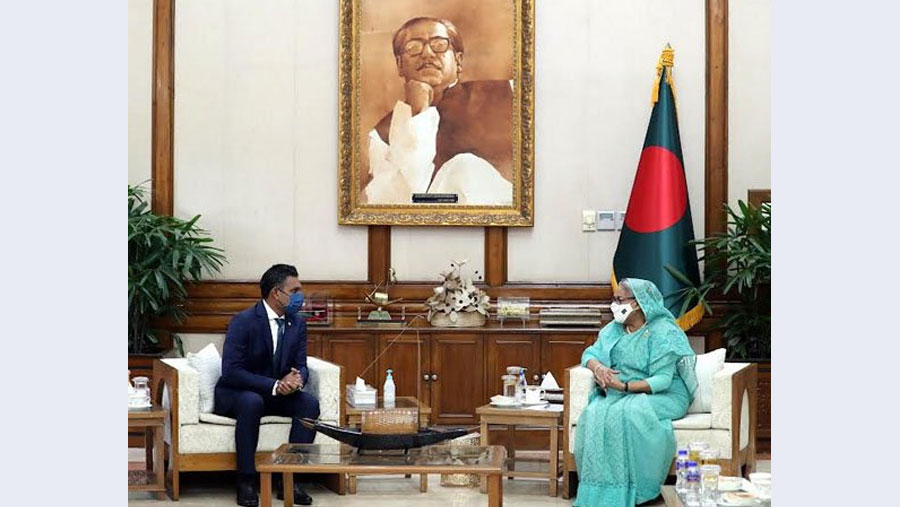 Prime Minister Sheikh Hasina on Wednesday (Nov 24) laid emphasis on the necessity for strengthening connectivity between Bangladesh and  Maldives to further boost trade and commerce between the two friendly countries.

"If the connectivity is strengthened, the bilateral trade and commerce would be developed further between the two countries," she said at a meeting with visiting Maldives Vice President Faisal Naseem at her official residence Ganabhaban in Dhaka.

"We can share our health sector experiences with the Maldives as Bangladesh has set up community clinics to ensure primary healthcare services. So, Bangladesh can help the Maldives in this regard," she said.

Sheikh Hasina also offered the Maldives to use the services of Bangladesh's Bangabandhu Satellite-1.

The PM informed the Maldivian Vice-President that she often highlights the Maldives as a climate-vulnerable country in different international forums.

Sheikh Hasina also expressed solidarity with the people of the Maldives.

The Maldivian Vice President said whenever his country fell in crisis, Bangladesh supported it.

Faisal Naseem said that he paid tribute to Father of the Nation Bangabandhu Sheikh Mujibur Rahman and visited Bangabandhu Memorial Museum.  "What he saw was a very heart-touching matter," said PM's press secretary.

He conveyed Maldivian President Ibrahim Mohamed Solih's profound respect and best wishes to the Bangladesh Prime Minister on the golden jubilee of the country's independence and the birth centenary of its Father of the Nation Bangabandhu Sheikh Mujibur Rahman.

Mentioning that a good number of Maldivian students are pursuing study particularly on medical courses in Bangladesh, he sought cooperation from Bangladesh for the students.

The visiting Vice President described his visit as a very successful one.

The Male Vice-President held meetings with Health Minister Zahid Maleque and Education Minister Dr Dipu Moni. During those meetings, he focused on cooperation between the two countries in the health and education sectors.

"The outcomes of the meetings are very positive," said Faisal Nassem.