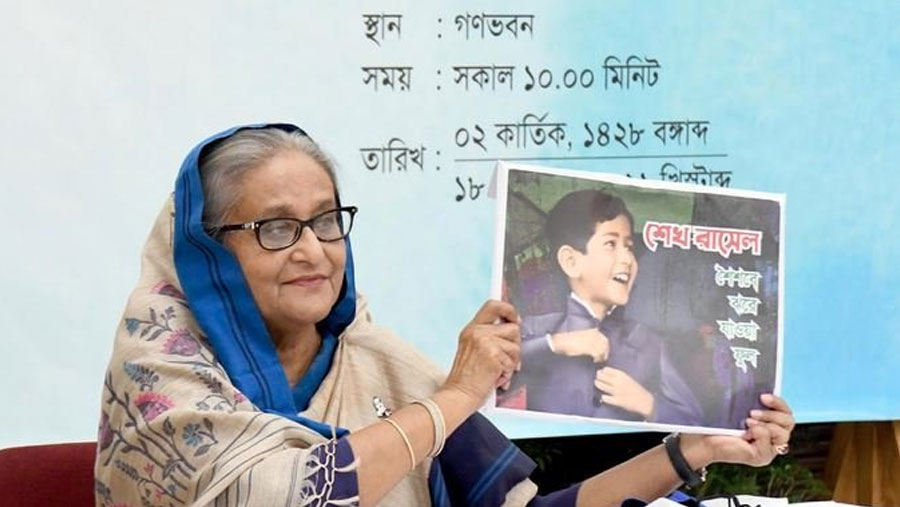 Prime Minister Sheikh Hasina on Monday (Oct 18) distributed ‘Sheikh Russel Gold Medal’ among the winners as she opened the ‘Sheikh Russel Day’ on the 58th birthday of Sheikh Russel, the youngest son of Father of the Nation Bangabandhu Sheikh Mujibur Rahman. The premier virtually inaugurated the day and handed over the gold medals among 10 winners from her official Ganabhaban residence in the capital in the morning, local media reported.

The nation, for the first time, observed the day in a befitting manner, as the government had earlier announced Oct 18, the birthday of Sheikh Russel, as ‘Sheikh Russel Day’ under the category ‘Ka’.

The day was also observed at Bangladesh missions abroad while different dailies published special supplements highlighting the significance of the Day.

On the day, 10 children in five categories – education, sports, science and technology, fine arts-literature-culture, and children with special needs – were awarded the ‘Sheikh Russel Gold Medal’ for their outstanding contribution to the respective fields. The awards include a medal weighing one tola of gold, a laptop and a certificate. Prizes were also distributed among the winners of the quiz competition. Besides, laptops are being distributed among 4,000 freelancers out of 40,000 participants under the Learning and earning Development Projects (LEDPP) for their outstanding performance.

An audio-visual presentation on the life of Sheikh Russel was screened and the theme song of the ‘Sheikh Russel Day’ was also played at the function. State Minister for Information and Communication Technology (ICT) Zunaid Ahmed Palak presided over the function and it’s Senior Secretary N M Zeaul Alam, spoke on the occasion. Sheikh Russel Jatiyo Shishu-Kishore Parishad Secretary General KM Shahidullah gave a welcome address and Afsa Zafar Srijeeta expressed her feelings on behalf of the children at the function while a parishad leader Barrister Jahangir Hossain Rani moderated it.

A Doa was held at the function, seeking eternal peace of the departed souls of Sheikh Russel and other martyrs of Aug 15 in 1975.

Sheikh Russel, the youngest son of Father of the Nation Bangabandhu Sheikh Mujibur Rahman and also the youngest brother of PM Sheikh Hasina, was born on Oct 18 in 1964 at the historic Bangabandhu Bhaban at Dhanmondi 32 no road in the city. He was brutally assassinated along with most of his family members, including his father Bangabandhu Sheikh Mujibur Rahman, on Aug 15, 1975 when he was a student of class four at the University Laboratory School.

To mark the day, government bodies, ruling Bangladesh Awami League and its associate bodies, and different socio-cultural organizations took various programmes to observe the day at national and international level.

The ICT Division and the Sheikh Russel Shishu Kishore Parishad jointly placed wreaths at Sheikh Russel's grave at the Banani Graveyard and at his portrait in front of respective ministry, division, office, agency and institution in the morning. Besides, the ICT division was organize a national seminar titled ‘Sheikh Russel Deepta Joyullas (Sheikh Russel radiant joy, indomitable confidence)’ and a concert titled ‘Concert for Peace and Justice’ at the BICC on the day.

The Bangladesh Shishu Academy will organize a book exhibition on Bangabandhu and Liberation War.

To mark the day, Awami League placed a wreath at the graves of other martyrs of the Aug 15 carnage in 1975, including Sheikh Russel, in the city’s Banani graveyard in the morning. Subsequently Fateha, Milad and Doa Mehfil were also held by the party members there.

Marking the day, a discussion will be held on Tuesday (Oct 19) at Awami League central office in the city’s Bangabandhu Avenue area. PM and Awami League President Sheikh Hasina will preside over the discussion through videoconferencing.