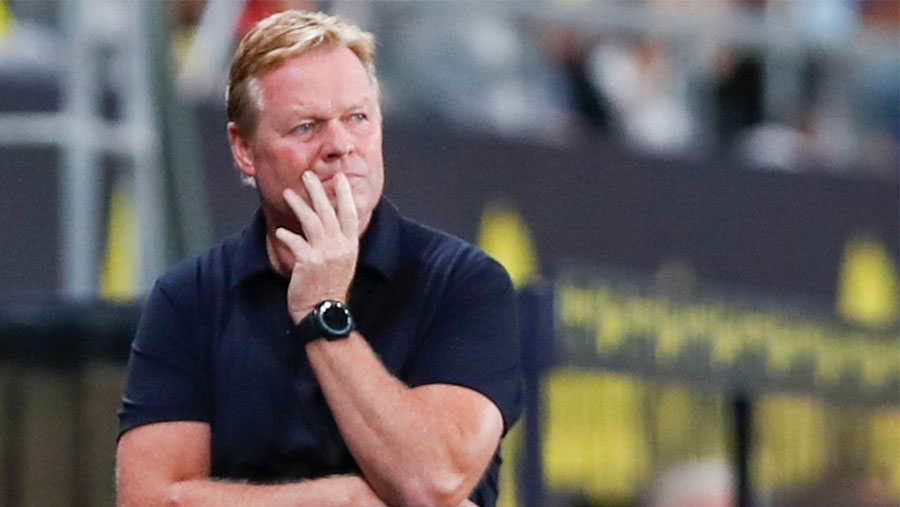 FC Barcelona coach Ronald Koeman will be banned from the touchline for two matches after being sent off against Cadiz. He will not be able to sit on the bench on Sunday as Barcelona host Levante and on Oct 2 when Barca visit champions Atletico Madrid.

Embattled Barcelona manager Ronald Koeman has received a two-match ban on Friday (Sep 24) for complaining at the end of a 0-0 draw at Cadiz in La Liga action the day before.

The result extended Barca's winless streak to three matches and increased the pressure on Koeman.

Koeman was sent off deep into stoppage time for complaints directed at the fourth official.

Koeman will miss Barcelona's home match against Levante in the Spanish league on Sunday, as well as the team's visit to defending champions Atletico Madrid next weekend.

One of the reasons that upset the Dutch coach was the sending off of midfielder Frenkie de Jong after a second yellow card earlier in the match.

Barcelona argued that De Jong touched the ball before contacting his opponent and shouldn't have been booked.

Koeman was hired shortly after the team's embarrassing 8-2 loss to Bayern Munich in the quarterfinals of the Champions League last year.

The Catalan club is playing without Lionel Messi for the first time in nearly two decades after he joined Paris Saint-Germain. They also lost forward Antoine Griezmann to Atletico Madrid.

Barcelona are in seventh place in the league with nine points, seven behind leaders Real Madrid with a game in hand. They visit Benfica next Wednesday in the Champions League after opening their European campaign with a 3-0 home loss against Bayern Munich.