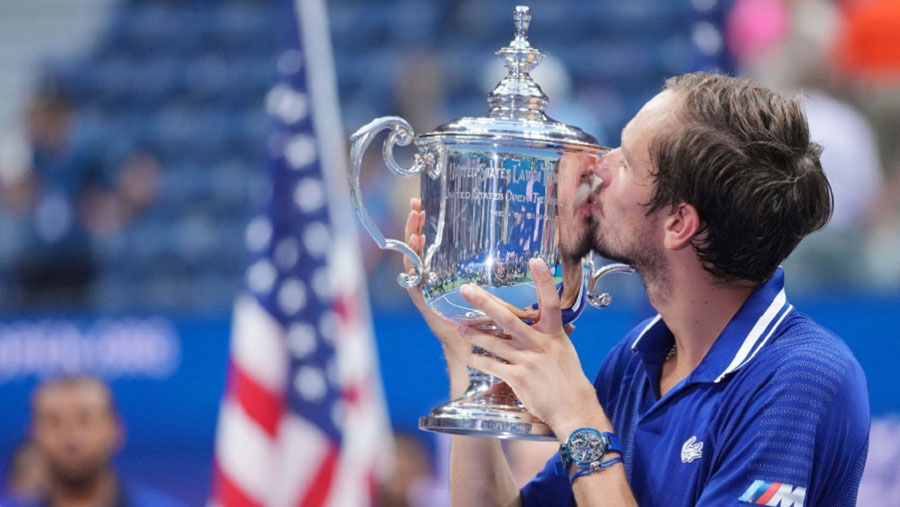 Novak Djokovic's bid for a record 21st major title that would have completed the calendar-year Grand Slam collapsed at the final hurdle in a stunning 6-4 6-4 6-4 defeat by Russian Daniil Medvedev in the U.S. Open final on Sunday (Sep 12).

Russia's Daniil Medvedev won his first Grand Slam title by shattering Novak Djokovic's hopes of completing a calendar sweep of the majors in a one-sided US Open final.

Second seed Medvedev, 25, lost his two previous Grand Slam finals but was composed throughout a 6-4 6-4 6-4 win.

Victory would have moved him clear of rivals Roger Federer and Rafael Nadal in the battle to finish with the most men's majors, but it was the potential calendar Grand Slam which Djokovic had said would be the "greatest achievement" of his career.

Djokovic was bidding to become just the sixth player to win a calendar Slam and the first man to do it since Rod Laver in 1969.

Perhaps burdened by the weight of history, Djokovic looked subdued throughout as he made a high number of uncharacteristic errors and also became tearful towards the end.

He also looked way short of his usual physical capabilities.

To put those factors down as the sole reasons for Medvedev's success would be completely wrong.

The Russian played smartly and confidently, drawing the errors out of his opponent with strong serving, dominating his opponent from the baseline and finishing points with precise winners, as he avenged a straight-set defeat by Djokovic in February's Australian Open final.

There was a slight wobble as he tried to serve out for the title – three double faults helped Djokovic nick back a break for 5-3 - before Medvedev composed himself to take his third championship point.

After sharing a warm hug with Djokovic at the net, Medvedev broke out in a broad smile before sitting back in his chair to contemplate finally winning the first Grand Slam title which he has long threatened.

"I want to thank my team, those who are here and watching. My parents, my family, my sisters. Some of my friends are here too," said Medvedev, who dropped only one set in the tournament.

"Thank you guys because it is not an easy journey to win a Slam. I'm really thankful to you for helping me throughout this journey."

Addressing Medvedev, Djokovic said: "If there is anyone who deserves a Grand Slam title right now, it is you. Well done. There will be many more titles to come, I'm sure."