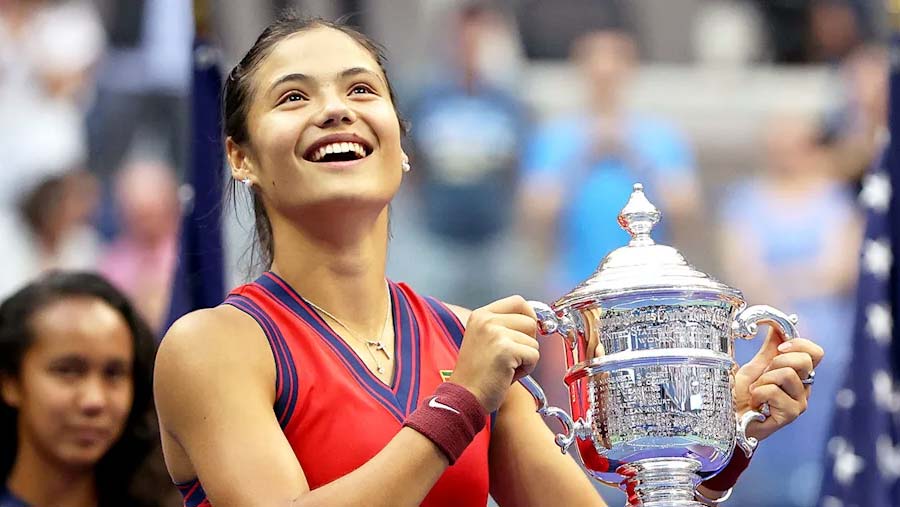 Britain's teen tennis sensation Emma Raducanu has clinched a stunning piece of history after winning the US Open title in a moment that has left the tennis world in awe.

In a US Open final that was already historic, the 18-year-old Brit made even more history when she defeated Fernandez to become the first qualifier in history (including both men's and women's singles) to win the title at Flushing Meadows.

Raducanu dominated the first two games, and was able to capitalize on Fernandez's seven unforced errors.

She had six break points in game two alone, which lasted nearly 20 points. But after looking lost in the first two games, Fernandez came roaring back to win the next two in decisive fashion.

Then Raducanu fought her way back from 30-0 to give herself a 3-2 lead.

Fernandez finally managed to get control of her serve, which had been a struggle for her in the early going, and tied it up 4-4. But Raducanu, with the crowd roaring behind her, won the next two games to win the first set.

The winner of the first set of the women's final almost always goes on to win the match, so Fernandez had a huge challenge in front of her.

She managed to grab a lead at 2-1, only to have Raducanu win three straight games.

She was starting to look tired – not hard to believe considering she's played four straight three-setters against the No. 3, No. 16, No. 5, and No. 2 seeds – and the match began to get away from her.

Fernandez won another game, and fought hard to extend the match, but in the end she couldn't swing the momentum back in her direction in time.

There was a lengthy delay when Raducanu slipped and cut herself on the court, with blood running down her leg.

The incident happened at a crucial point in the second set as a resurgent Fernandez fought back to set up a break point chance after saving two championship points earlier.

Fernandez was clearly unhappy as the match was stopped for around five as Raducanu was attended to by medical staff.

The Brit had a bandage wrapped around her bloody leg before she eventually returned to try and hold serve and capture her maiden major title.

Raducanu demonstrated no ill effects of the cut as she twice fought off break point chances from Fernandez with some nerveless shot-making, before sealing the win with a booming serve.

The 18-year-old collapsed onto the court in delight as the Arthur Ashe crowd rose to their feet to salute the new US Open champion.

Her incredible achievement lit up social media as the world hailed the new US Open champion.

The evening in Flushing Meadows began with a ceremony to remember the victims of the Sep 11 attacks 20 years ago – before both finalists were born.

The reception the young women received when they walked out onto Arthur Ashe indicated that Fernandez, who lives in Florida, would receive the most support, her giant-killing run having captured the hearts of the New York crowd.

Raducanu had not been troubled enough to really need to draw on the crowd, with her closest set coming in the second round of qualifying, when she was just another lower-ranked hopeful trying to reach the main draw.

She shut down any suggestion there might be any pressure on her going into the final.

The 18-year-old – whose life had already changed regardless of the outcome in the final – also walks away from New York with a $2.5 million ($A3.5m) winner's cheque.