HC orders to include Bangabandhu's Mar 7 speech in textbooks 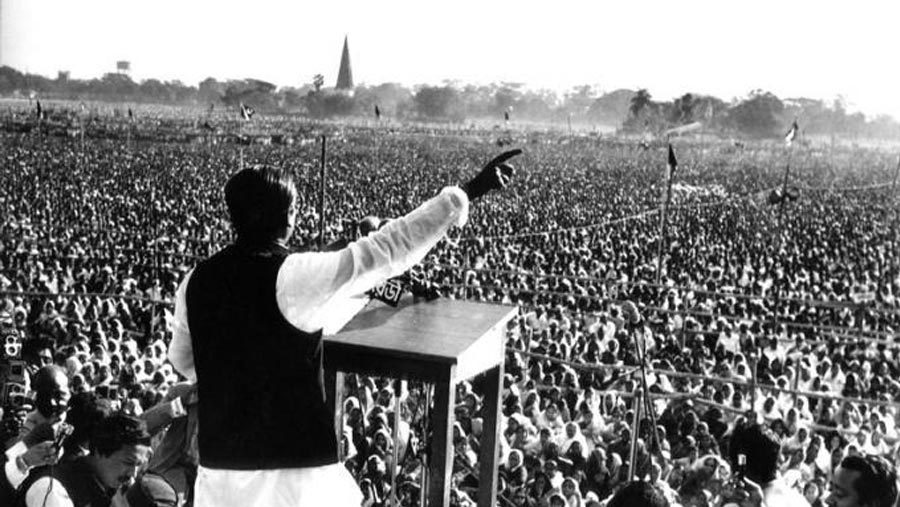 The High Court (HC) on Wednesday (Sep 8) ordered authorities concerned to include the historic speech of Father of the Nation Bangabandhu Sheikh Mujibur Rahman in textbooks of university, college, secondary and higher secondary levels.

A HC division bench of Justice F R M Nazmul Ahasan and Justice Shahed Nuruddin passed the order after holding further hearing on a rule issued earlier in this regard.

"An expert committee will do the job of including the speech in textbooks," petitioner Advocate Dr Bashir Ahmed told media.

The court also asked authorities concerned to expedite the work of building sculpture of the Father of the Nation at Suhrawardy Udyan and implement the earlier order of setting up Bangabandhu's murals in all the districts.

The HC on Feb 25, 2020, had ordered authorities concerned to declare Mar 7 as 'Historic National Day' and issue a gazette notification within next one month in this regard.

The court on that day had issued the rule asking as to why it shall not pass order to include glorious history of Mar 7 in primary, secondary, intermediate and varsity curriculum.

The HC on Nov 20, 2017, had issued another rule asking the authorities concerned to explain in three weeks as to why Mar 7 shall not be declared as Historic National Day.

The court in its rule also had asked why a stage will not be recreated at the place in Suhrawardy Udyan, where Bangabandhu stood and delivered his historic speech on Mar 7, 1971, accorded reception to former Indian Prime Minister Indira Gandhi, and where Pakistani occupation army surrendered to the allied force on Dec 16, 1971.