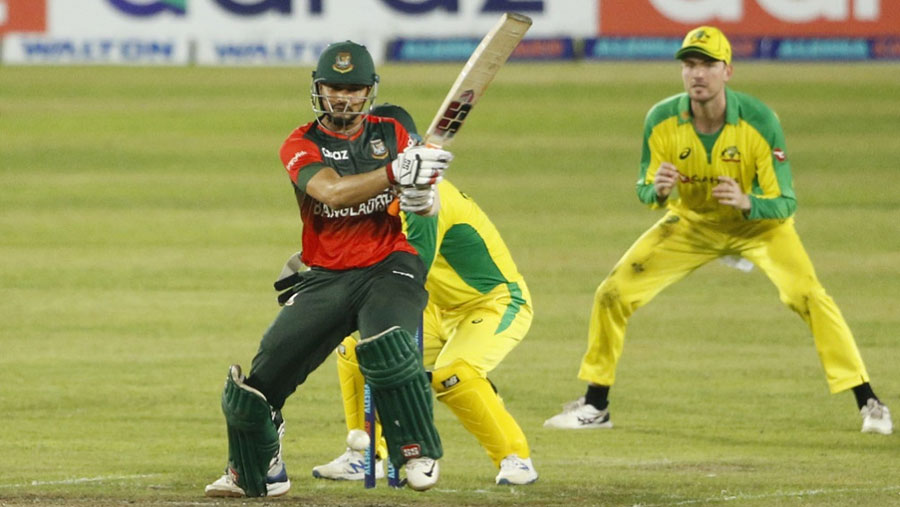 Afif Hossain and Nurul Hasan remained unbeaten as Bangladesh beat Australia by five wickets in the second Twenty20 international to lead the series 2-0 on Wednesday (Aug 4). Chasing 122 for victory, Bangladesh depended on an unbroken 56-run sixth-wicket partnership between Afif (37) and Nurul (22) to achieve their target with eight balls to spare in Dhaka.

Bangladesh recovered from a shaky 67-5 to beat Australia by five wickets Wednesday (Aug 4) and go up 2-0 in the five-match Twenty20 series.

A 56-run partnership by Afif Hossain and Nurul Hasan for an undefeated sixth-wicket stand proved to be key as Australia was in a favorable position to level the series despite being restricted to 121-7.

The Tigers reached the winning mark with eight balls remaining.

Afif, who finished game with a boundary, was unbeaten on 37 off 31, hitting five fours and one six. Hasan was on 22.

“We knew we had to stay calm, keep wickets in hand,” Afif said. “Nurul played well so there was no pressure on me either.”

Australia fast bowler Mitchell Starc and his new ball partner Josh Hazlewood removed Bangladesh openers Soumya Sarkar and Mohammad Naim in the fourth over. But Shakib Al Hasan hit Starc for three boundaries in a row to release the pressure.

Andrew Tye undid Shakib (26) with a slower delivery to help the side claw back into the game again.

Australia then took a firm grip on the match when left-arm spinner Ashton Agar removed captain Mahmudullah for 0 and leg-spinner Adam Zampa got rid of Mahedi Hasan for 23.

But Afif and Hasan played with caution and aggression to deny Australia the victory.

“We were in a good position today (with the ball), but unfortunately we struggled with the bat in the last four overs,” Australia captain Matthew Wade said.

Australia’s batsmen dealt better with spinners after being tormented by them in the first match.

Alex Carey reverse-swept Nasum Ahemd twice for four and gave the side a positive start.

But Mustafizur and Mahedi put Australia on 31-2 in the first powerplay.

Marsh and Moises Henriques put on 57 off 52 for the third wicket in a pitch that was not ideal for stroke-making.

Shakib (1-22) broke the partnership, dismissing Henriques with an arm-ball after he struck 30 off 25 with three fours and one six.

The third T20 is on Friday with all the matches to be played at the same venue.