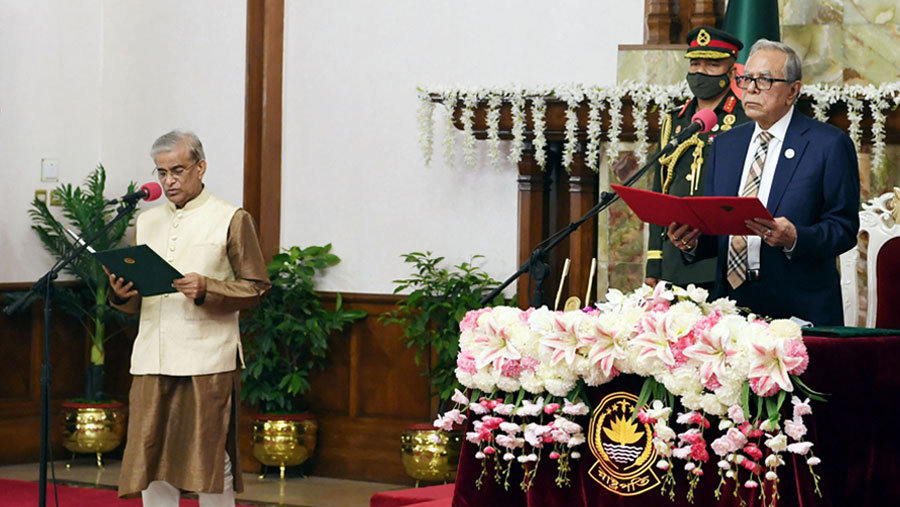 Prime Minister Sheikh Hasina's cabinet further witnessed a minor reshuffle amid an oath-taking ceremony inducting a new face into the council of ministers at Bangabhaban this evening, local media reported.

Prof Dr Shamsul Alam, a member of Planning Commission's General Economy Division (senior secretary), today sworn in as the state minister for planning. President Md Abdul Hamid administered the oath of office and secrecy of the cabinet member at Bangabhaban.

Cabinet Secretary Khandker Anwarul Islam conducted the ceremony which began with recitation from the holy Quran at 7:30 p.m.

The appointment of this position came into effect soon after taking oath.

Earlier, the President of the Republic in line with the Section-56 (Article-2) of the Bangladesh Constitution gave the appointment the state minister.

At the outset of the ceremony, the head of the state entered the Durbar Hall of Bangabhaban at 7:29 p.m.

The new cabinet member took oath pledging to preserve, protect and defend the national constitution and state sovereignty. After the swearing-in ceremony, he also signed the oath of office and oath of secrecy.

Prime Minister Sheikh Hasina's cabinet took oath on Jan 7, 2019 for a third consecutive term. Later, a minor reshuffle in the cabinet took place on May 19.

On Jul 13, 2019, an oath-taking ceremony promoting a state minister to a minister and inducting a new face into the council of ministers took place.

With this minor reshuffle of the 48-member council of ministers, it now becomes 49 with 25 ministers, 20 state ministers and three deputy ministers.

Besides, secretaries concerned to the Bangabhaban, ministries concerned, and senior civil and military officials were also present on the occasion. The ceremony over, the guests were entertained with snacks.

Due to the fatal Covid-19 pandemic, the oath-taking ceremony was held at a small scale at Bangabhaban with the present of some senior ministers and important officials familiar with the process.

Prof Alam worked as a member of General Economy Division (GED) since 2009 and his contract ended on Jun 30 this year.

He joined Bangladesh Agricultural University as a teacher in 1974 and continued till 2009. He achieved honours and masters degrees from the same university in 1965 and 1973 respectively.

Dr Alam received Ekushey Padak in 2020 for his outstanding contribution to the country's economy.